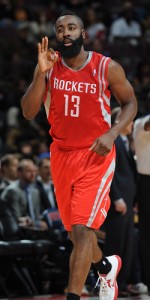 James Harden scores 37 points in his debut with the Houston Rockets. (GETTY IMAGES)

It didn’t take long for James Harden to reward his new NBA team for signing him to the most lucrative contract of his young NBA career.

Just hours after he agreed to a five-year, $80-million maximum contract with the Houston Rockets, Harden went out and absolutely dominated the Detroit Pistons. Despite having little practice and barely knowing his teammates, Harden looked like a man who is ready to become an All-Star as he scored a game-high 37 points, had 12 assists, made four of 10 3-pointers, and had four steals in his Rockets debut.

Harden hit the ground running, scoring 19 points in the first half and immediately putting his imprint in the game with his patented drives to the basket. Detroit led 83-72 early in the fourth quarter, but Harden brought the Rockets back and literally went right through the Pistons defense to do it.

The reigning Sixth Man of the Year fell just short of his career high of 40 points, and his 12 assists were a career best. Not bad for a guy still adjusting to new teammates and a new situation. Harden started only seven games in three seasons in Oklahoma City, as he developed into an indispensable reserve. But he was in the starting lineup Wednesday and looked ready to play a bigger role with Houston.

”I just tried to score and create opportunities,” Harden said. ‘I just tried to get my bigs involved. A lot of different guys stepped up, and I think that’s how it’s going to be throughout this entire season.”

Harden pretty much put the game away with a three-point play with 1:27 remaining that put Houston ahead 104-94.

”They keep it so simple as far as just spreading it out and letting him create,” Detroit’s Rodney Stuckey said. ”Pick and rolls, that’s pretty much what got us. They did a good job of spreading us out. He was getting in the lane, making shots and finding his teammates and they were making shots, too.”

Harden and his backcourt partner Jeremy Lin are very good pick-and-roll players, and give credit to head coach Kevin McHale for adjusting on the fly and allowing Harden to do what he does best. ”I thought it was a challenge for James to kind of figure out what we were doing,” McHale said. ”We put some plays in that he was comfortable with that they ran at Oklahoma City.”

Imagine what Harden could do if he actually got more comfortable in Houston? Oklahoma City will regret trading Harden.