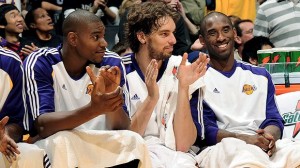 Lakers big men Andrew Bynum and Pau Gasol (middle) were outplayed by the Rockets' big men in Game 6 in Houston. Kobe Bryant will need to inspire his team for Game 7 in Los Angeles. (NBAE/GETTY IMAGES)

NBA TV analyst and former Houston Rocket Kenny “The Jet” Smith made a very bold but accurate statement on TNT’s “Inside the NBA” show after the Los Angeles Lakers destroyed the Rockets by 40 points in Game 5. Smith said the Lakers have a certain “arrogance” about them, arrogant in a sense that they feel and act like they are better than everyone else so they put forth the effort and energy only when necessary, and they only play hard when they want to and only if they have to. In the words of the great Sean “P. Diddy” Combs, the Lakers are suffering from a serious case of “Bitchassness.”

Whether it’s bitchassness or arrogance, whatever it is or whatever you call it, the Lakers are guilty of giving very little respect to the Rockets. It is the reason why they lost, 95-80, in Game 6 in Houston, and it is the reason their Western Conference semifinal series with the Rockets is tied 3-3 and headed for a seventh game in Los Angeles.

The arrogance starts at the top, namely Coach Phil Jackson and Kobe Bryant.

Bryant’s supreme confidence and swagger is legendary, which is common among great players, but the Black Mamba amplifies it. He often plays off his man (unless their name is LeBron James, Dwyane Wade or Brandon Roy); gambles way too much on defense; shoots passes to himself by bouncing them off the backboard and, early in Game 6, he was caught chewing on his jersey while driving to the basket. All of these antics are totally unnecessary and gives the perception that Kobe is full of himself.

Jackson is the same way. When a reporter asked if he was worried about playing a Game 7, the Zen Master brushed it off.

“There is nothing to worry about, I mean it’s just a game and we’re gonna go out there and play. It’s on our home court and that’s what we play for,” Jackson said. “Last game, we beat them by … whatever. We play a different game on our home court, and it’s pretty obvious to see.”

It’s pretty obvious to see that Jackson is fronting with his statements, partly to prevent a panic attack from his team, but it does not put Phil in a good spot when he says, “Last game, we beat them by … whatever.” He can’t remember the score?

Los Angeles Times columnist T.J. Simers, who drew a profane response from Jackson after Game 4, asked if the loss in Game 6 was embarrassing to which Jackson replied, “Next question.”

Right from the get-go in Game 6, the Lakers looked disinterested and lackadaisical. Houston forward Luis Scola repeatedly schooled Lakers forward Pau Gasol in the post, setting the tone for the entire game. By establishing an inside game, the Rockets forced the Lakers to double team the post, which ultimately opened the court for point guard Aaron Brooks.

Scola finished with 24 points on 10-of-17 shooting and grabbed 12 rebounds, thoroughly outplaying Gasol. At one point during the first quarter, Kobe was seen slapping and shoving Gasol on the head during a timeout trying to wake him up. Now, if you need to be told to STEP YOUR GAME UP! in Game 6 of a playoff series, then there is something lacking inside your chest.

But it wasn’t just Gasol that Kobe tried to resuscitate. Bryant was also seen thumping Lamar Odom on the chest to get him going. Bryant had so many Lakers to revive in the Game that it looked like an episode of “Grey’s Anatomy.” While the Lakers were busy with their little therapy sessions on the bench, the Rockets were getting busy manhandling the Laker bigs and playing with purpose and energy.

Ron Artest pointed this out the last game. He said the Rockets do not have anyone taller than 6-9, yet they find ways to get the job done. Since Yao Ming went down, Chuck Hayes has been manning the center position and, at 6-6, he might be the shortest starting center in the history of the league. Yet, he keeps 7-foot Andrew Bynum off the block and pushes the 7-foot Gasol out of his comfort zone. By the way, when did Bynum become D.J. Mbenga? Just wondering how someone as big and as long as Bynum can have such a small impact in the game. Bynum went scoreless in 19 minutes. Maybe a trip to the Playboy Mansion might cure his fragile psyche.

One guy who is not playing small is Houston reserve Carl Landry. Though listed at 6-7, Landry plays bigger than his height and attacks the rim. He threw down a dunk in the fourth quarter that punctuated his 15-point effort and sent a loud message to Odom and the Lakers.

The message was: “Do we have your attention now?”