Scottie Pippen recently visited ESPN’s First Take show to talk hoops, but he was there mainly to pump up his wife’s new venture into the reality TV world.

Larsa Pippen will be a part of the cast on “The Real Housewives of Miami,” which airs on Feb. 22 on Bravo. She’ll be joined by another well known NBA housewife, Cristy Rice. Cristy is the former wife of NBA star Glen Rice. She’s a single mom of three children and runs her own clothing store.

Larsa currently holds the unofficial title of “Hottest NBA Wife.” She is a former model and is Assyrian-American heritage. They’ve been married since 1997. Jay Crawford of First Take asked Scottie Pippen who is the head of the Pippen household, and the six-time NBA champion said, without hesitation, that his wife is the real MVP of the family. 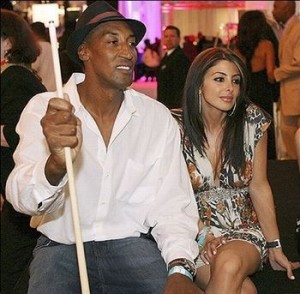 Once again, Scottie Pippen has to play second fiddle. He certainly doesn’t mind deferring. You think Michael Jordan will ever admit that his ex-wife was the one holding court? Doubt it.

The rest of the cast of the Miami “Housewives” include:

Alexia Echevarria: She calls herself “Cuban Barbie” and is executive editor of Venue, a magazine devoted to fashion and Latin A-listers. She loves to spend time in her Miami Beach home with her husband, Hernan, and her two sons from a previous marriage.

Marysol Patton: She heads up her own ultra-glam public relations firm The Patton Group.

Lea Black: A community leader and major supporter for Barack Obama who heads up her own charity. She and husband Roy Black, one of the country’s top criminal defense attorneys, share a 9-year-old son.

Adriana DeMoura-Sidi : Fresh off a nasty divorce, this Brazilian-born art curator is engaged to Frederic.