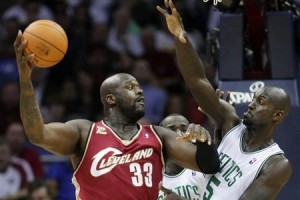 Shaquille O'Neal has yet to sign with an NBA team. (GETTY IMAGES)

August is nearly here and Shaquille O’Neal is still a free agent. Not many teams are jumping at the chance to snag The Big Diesel, who is reportedly asking for a two-year deal worth around $8 million. O’Neal will be 39 years old in March and his once imposing presence and larger-than-life reputation has become nothing but a distant memory.

If O’Neal posted his resume on Craigslist it would read something like this: Three-time NBA Finals MVP looking for work …. Funny, outgoing and likes to come up with nicknames …. Prefers to play for a winning program ….  can only work half a season, and preferably just 24 minutes a day  and no more than 150 minutes per week …. Salary: negotiable …. Medical benefits: needs full coverage because of preexisting condition …. Work experience (by city): Orlando, Los Angeles, Miami, Phoenix and Cleveland …. Unique skills: space eater, hard to move, very strong …. Hobbies: likes to rap and dance (part-time member of the hip-hop group Jabbawockeez: America’s Best Dance Crew) …. References: available upon request.

If he retires now, after 18 seasons, O’Neal will leave with four championships, three NBA Finals most valuable player trophies and 15 All-Star game appearances, and he is second all-time in field-goal percentage at .581.

All those numbers are certainly good enough to put him in the Naismith Basketball Hall of Fame in Springfield, Mass., but they all could have been better.

Shaq says he wanted to leave the game with at least five championships. He won three with the Lakers and one with the Heat, which leaves him one short of his goal. O’Neal could have won more than three with the Lakers, but he wasted a lot of “company time” arguing with Kobe Bryant. He won just one regular season MVP (2000) and never played more than 79 games in each of his eight seasons in L.A.

Although he helped lead the Heat to an NBA title in 2006, it was Dwyane Wade who was named Finals MVP. The last time O’Neal was an MVP was his first year in Miami (2005). From that point on, O’Neal’s scoring average has dropped like the stock market.

His 28,255 points puts him fifth on the all-time list for now, but he could have easily surpassed 30,000 had he not missed more than 5,000 free throws. Last year, he averaged just 12 points and six rebounds – half of what he averages for his career.

There were reports that the Hawks were interested in signing O’Neal, but their interest has diminished. The Celtics, who are in need of big men, toyed with idea of bringing in Shaq to fill the void left by Kendrick Perkins, who is expected to be out until January after knee surgery. Boston ended up signing an O’Neal, but it wasn’t Shaquille. Instead, the Celtics and Jermaine O’Neal agreed to a two-year deal and if Rasheed Wallace comes out of retirement it would be foolish for the Celtics to go after Shaq.

The Spurs were in The Diesel’s radar, but the signing of Brazilian center Tiago Splitter, the best big man in Europe last season, pretty much ended a Shaq-Duncan pairing.

So which teams can afford to fit O’Neal into their plans? Here are seven possible destinations for Shaq:

— New Orleans Hornets: Shaq played at LSU and wouldn’t mind a return to the Bayou. The Hornets have Emeka Okafor as their starting center, but he’s not immune to getting dealt. If the Hornets decide to keep Okafor, O’Neal will have to swallow his pride, take a pay cut and be Okafor’s backup. Not likely to happen, unless Chris Paul tells management that he wants to play with Shaq.

— Milwaukee Bucks: The injury to Andrew Bogut may take a while to heal, so the Bucks are looking to rent a center for a few months. Head coach Scott Skiles still holds Shaq in high regard and has maintained a solid relationship with The Big Aristotle. Shaq would fit right in Milwaukee and be the strong personality in the locker room for the young Bucks.

— Oklahoma City Thunder: OKC acquired 6-11 center Cole Aldrich in the draft, but they certainly wouldn’t mind adding more size to their already very quick and athletic roster. However, Shaq will be a huge liability on both ends of the court and GM Sam Presti may be reluctant to bring in a big personality like the self-proclaimed MDE that would stunt the growth of 21-year-old leaders Kevin Durant and Russell Westbrook.

— Atlanta Hawks: There is still an outside chance that O’Neal signs with the Hawks to bolster their very small frontline. But O’Neal must take less money or else this could be a deal-breaker.

— Boston Celtics: Ditto. If Shaq wants to have another shot at winning a championship ring, the Celtics may be his best opportunity. But, are the Celtics still interested?

— L.A. Clippers: Shaq back in L.A.? Wouldn’t that be something. This would be a longshot given the Clippers’ history of not being big players in the offseason, but bringing in a guy like Shaq would certainly upgrade the Clippers brand off the court. On the court, O’Neal would have to play behind Chris Kaman, but that’s easier said than done. O’Neal’s massive ego may not be able to handle that demotion. But if O’Neal agrees to play second fiddle and takes less money, it would certainly would inject some HGH into the Lakers-Clippers rivalry.

— Cleveland Cavaliers: Another longshot given Shaq’s wish of playing for contender. The Cavaliers’ championship aspirations went out the door as soon as LeBron James said “Good-bye to Cleveland” and “Hello to Miami.” O’Neal played with new Cavs head coach Byron Scott with the Lakers so playing for B-Scott shouldn’t be problem.

And should all of these teams pass on The Big Free Agent, there’s always a spot open with the Jabbawockees. 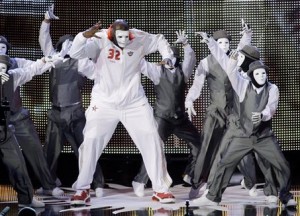 Shaquille O'Neal performs with the Jabbawockeez at the 2009 NBA All-Star Game in Phoenix. (ASSOCIATED PRESS)