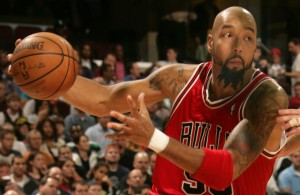 Forward Drew Gooden could command plenty of attention from all the contenders. (SLAM)

Their names came across the ticker with very little fanfare, but they could hold the fate of teams contending for an NBA championship. The news read like this: the contracts for Joe Smith and Drew Gooden were bought out by Oklahoma City and Sacramento Kings.

Gooden was traded to the Sacramento Kings as part of the six-player deal that brought Brad Miller and John Salmons to the Chicago Bulls. After playing one game for the Kings, he was waived on March 1 and is now free to sign with any team.

Still considered productive and relatively young at 27, Gooden should command plenty of interest from several elite teams such as Cleveland, Boston, San Antonio and even the L.A. Lakers. Gooden is a power forward who can play a little bit of center, and averaged 13 points and eight rebounds in 31 games for Chicago this season.

According to the San Antonio Express-News, the Spurs are in hot pursuit of Gooden, who fills a need in their front court. What is also attractive to the Spurs is Gooden’s defense. Having played in Cleveland under Mike Brown, who is a disciple of Gregg Popovich, Gooden has a good grasp of San Antonio’s defensive scheme, is a solid rebounder and a physical presence inside at 242 pounds.

“We’ve got to do our work, just like everybody else,” the Spurs coach told the Express-News. “So when there’s a trade deadline, or waiver wires, we pay attention to it, like any other team would, because you’re always trying to upgrade your team if you think you can.”

Smith was nearly traded to the New Orleans Hornets as part of the Tyson Chandler deal, but the transaction fell apart after Chandler failed his physical. Once the trade was nullified, Smith became an afterthought and it was only a matter of time before the Thunder released him. Now, he’s free to sign with any team.

“This was something that was brought to us by Joe and his representatives,” Oklahoma City general manager Sam Presti told the Associated Press. “We were able to reach an agreement that will allow him to pursue another opportunity.”

The Cavaliers, who are in desperate need of a front-court player after Ben Wallace went down with a knee injury, are the clubhouse leaders in signing Smith, a 14-year pro who has played for nine NBA teams, which includes Cleveland.

Smith, 33, was the top overall pick in 1995 by Golden State and had some productive years with the Warriors, Timberwolves and had his moments with the Cavaliers in last season’s playoffs. Published reports say Smith would prefer to play with LeBron James and the Cavaliers, but the Celtics, Spurs and Lakers are also interested in landing the 6-10 forward.

Kevin Garnett has been tugging at GM Danny Ainge’s shirt to acquire Smith, who played with Garnett at Minnesota. Before the Cavs played Miami on Monday, James voiced his desire to get a veteran leader, such as Smith, for the stretch run.

As soon as Gooden and Smith clear waivers, which could be as early as March 4, signing either one could mean the difference in winning an NBA title.