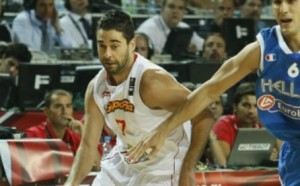 Juan Carlos Navarro was the captain of the Spanish national team that competed in the 2010 FIBA World Championship in Turkey. (FIBA)

Like most European sensations, Juan Carlos Navarro wanted to try his luck in the NBA. He played one season with the Memphis Grizzlies in 2007-08, teaming with fellow Spaniard Pau Gasol.

The Grizzlies acquired Navarro’s draft rights from the Washington Wizards – which selected the Spanish guard with the 40th overall pick in 2002 – and believed he would be a good fit for an up-and-coming team that needed some savvy veterans.

But Navarro’s NBA career was short-lived. After Gasol – his friend and teammate on Spain’s national team – was traded to the Los Angeles Lakers in 2008, Navarro didn’t like where the Grizzlies were headed and began planning a return trip to Europe.

His home team of nine years, Regal FC Barcelona, made him an offer he couldn’t refuse. The contract was reportedly worth $20 million for five years, which dwarfs what the Grizzlies paid him ($538,000) for his one-year service. 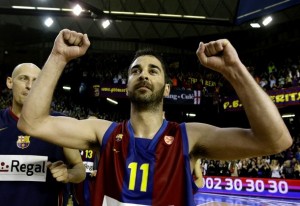 For the past two seasons, the man they call “La Bomba” has rediscovered his touch and reasserted himself as one of the elite players in Europe. Navarro won the Euroleague’s MVP in 2009 and recently led FC Barcelona to an 86-68 victory over Olympiacos in the 2010 Euroleague Final in Paris. Navarro scored a game-high 21 points in the final game and was named Euroleague Final Four MVP.

It was FC Barcelona’s second Euroleague championship, and Navarro has been a part of both titles.

He was a role player on the Barcelona team, anchored by MVP Dejan Bodiroga, that won the Euroleague title in 2003. Seven years later, Navarro has not only become the face of FC Barcelona – along with fellow Spanish superstar Ricky Rubio – but he has emerged as arguably the No. 1 player in Europe.

“I am very happy to be here. All our hard work has paid off,” the 30-year-old Spaniard told Euroleague.net. “We did a very good job and I am very happy for my teammates. We stepped on court ready to play such an important game.

“My first Euroleague title was special because it was the first for the club, but being a more important player this time, this is just as special, too.”

Navarro is a unique talent. He is not blessed with great size (listed at 6 feet 4 but probably closer to 6-2) and quickness, but he finds various ways to score. Not only is Navarro a great outside shooter, but he also has an unstoppable one-handed runner or floater that is very difficult to stop and frustrates defenders because it’s an off-balance, unorthodox shot on the move. The San Antonio Spurs’ Tony Parker and Chicago Bulls’ Derrick Rose have this shot in their arsenal, and more and more point guards are practicing it.

Navarro is currently participating in the 2010 FIBA World Championship in Turkey. When Gasol decided to skip the worlds and rest his body after a grueling NBA season with the two-time NBA champion Lakers, Navarro was named captain of the Spanish national team. He led Spain in scoring (16 points per game) during the preliminary round and shot 54% from the field – 40% from 3-point range.

Though Spain finished a disappointing 3-2 in Group D it still managed to advance to the round of 16, where it knocked out tournament heavyweight Greece, 80-72, in a heated game. Navarro made seven of 10 field goals against the Greeks, including a crucial 3-point shot with less than two minutes to play in the fourth quarter that sealed the victory.

Navarro had plenty of help in the game against Greece. Rudy Fernandez scored five of his 14 points in a 9-0 Spain run midway through the fourth quarter that pushed Spain’s lead from one point to 10 points. Fran Vazquez and Felipe Reyes combined for 12 points and 17 rebounds off the bench.

Spain advanced to the quarterfinals where it will face Serbia, which defeated Croatia 73-72 in the round of 16.

Dimitris Diamantidis and Nikos Zisis each had 16 points to lead Greece. After the game, Diamantidis told reporters that he is retiring from international competition.