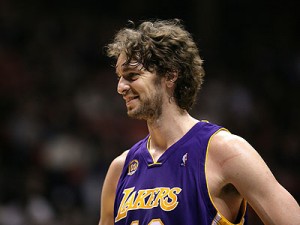 Though Pau Gasol is focused on winning an NBA championship, his heart is still in Spain.

So, when the Spanish national team suffered a stunning 1-0 loss to Switzerland in its first match in the 2010 FIFA World Cup in South Africa, Gasol felt the pain of his countrymen.

“Tough loss. Not the way we expected our team to start the championship,” said the Lakers forward, who plays for Spain’s national team in basketball. “It puts them in a position where they have to win probably the two games they have left against Honduras and Chile.”

Gasol said he watched the Spain-Switzerland match on TV and was just as surprised as anyone when the second-ranked team in the World Cup couldn’t score against the Swiss defense.

“I woke up this morning and I couldn’t sleep anymore,” Gasol said. “It’s 8:30 and I turn the game on and the next thing I know we’re down 1-0 and struggling and scrambling to try to score a goal. It happens. Soccer is an interesting sport and it was unfortunate that we started out that way, but we still have a long ways to go.”