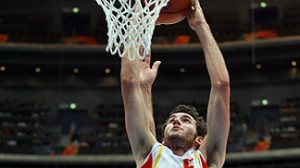 Spain's Rudy Fernandez should generate plenty of excitement to Blazers fans in 2008-09. CREDIT/FIBAEUROPE.COM

His name is Rodolfo Farres Fernandez but goes by one name on the back of his jersey: Rudy.

Rudy Fernandez is considered by many as the best player in Europe having starred for DKV Joventut in Badalona. At 6 foot 5, he is listed as a shooting guard but can easily play three positions. He doesn’t start for Spain’s Olympic basketball team but he impacts the game as soon as he checks in.

If Pau Gasol is the big engine of Team Espana then Rudy, 23, is the battery for the simple reason that he plays with boundless energy and brings electricity on the court with his unbelievable hops. Think Manu Ginobili but only much younger.

Rudy’s game is NBA ready. He has the NBA-like ability to finish near the rim and is not afraid of contact. He also plays with a little bit of an attitude, which is rare for a European-born player. His talents have been on full display in Beijing.

In Spain’s opening-game 81-66 victory over Greece, Rudy scored a team-leading 16 points off the bench. Against China, Rudy had 21 points and teamed with another young Spanish star, 17-year-old Ricky Rubio, to help Spain overcome a double-digit deficit and score an 85-75 victory in overtime.

Fernandez, whose sister (Marta) plays for the L.A. Sparks of the WNBA, was originally drafted by the Phoenix Suns in 2007 before his rights were traded to the Portland Trail Blazers. His contract from Joventut was bought out in order for him to play for the Blazers this season. Just what the Blazers needed. Another young stud to add to the team’s growing collection of young talent.

If the rest of the world doesn’t know who Rudy Fernandez is then the Beijing Olympics will serve as his springboard to stardom. Who knows? Instead of chants of “Kobe!…Kobe!…” in Beijing, you might hear chants of “Rudy!…Rudy!…”