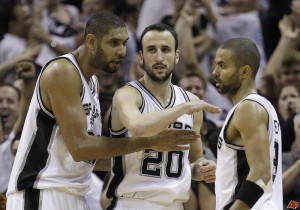 The Spurs' big three of Tim Duncan, Manu Ginobili and Tony Parker are off to a fast start in the 2010-11 season. (ASSOCIATED PRESS)

Who says who can’t teach an old dog new tricks. The San Antonio Spurs own the best record in the NBA at this time, and they are doing it with . . . drum roll, please . . . offense.

The Showtime Spurs? Yes, those same old Spurs – known as a defensive-minded team for the past decade, a philosophy that drove them to four NBA titles – has decided to throw a curveball to the entire league. Instead of the slow, prodding, methodical walk-it-up-the-court and wait-for-Duncan-to-post-up approach, the Spurs have made more of a concerted effort to push the ball up the court and get easy scores off fastbreaks.

But the Spurs’ new uptempo style doesn’t resemble the Suns’ frenetic, seven-seconds-or-less offense. It’s more of a controlled chaos and players are more judicious with their shot selection. Though head coach Gregg Popovich has given the green light to his players to hoist early shots, it doesn’t mean they’re allowed to take stupid shots.

“[The Spurs] are insulting team,” said TNT analyst Kenny Smith. “They’re basically are saying most teams are dumb because they say that ‘We’re going to take good shots on every possession and we don’t think that you’re disciplined enough to do that to beat us. We don’t think that you are smart enough to make good plays for 48 minutes.’ ”

Smith added, “[The Spurs] bank on the fact that, they don’t have as much talent as everyone, but you will take dumb shots or quick shots and play out of character. To me, that’s insulting if I were an NBA player.”

Though Tim Duncan remains a key cog in the Spurs’ machinery, the offense now highlights the open-court skills of Tony Parker, Manu Ginobili and Richard Jefferson. When you watch the Spurs these days, as soon as Duncan or one of the big men grab a rebound, they are looking for the outlet pass and most of the time the ball winds up in the hands of Parker or Ginobili.

Ginobili has benefited the most from the early offense because it highlights his incredible one-on-one skills. Ginobili leads the Spurs in scoring at nearly 20 points a game and he has stayed relatively healthy through the first quarter of the season.

Parker, now in his ninth year, has always been one of the best open-court players in the league, a one-man fastbreak who can go end-to-end like Usain Bolt. The Spurs used to rely on Parker’s fastbreak skills about 50% of the time. Now, they look to use Parker almost 90% of the time.

What has made the Spurs more dynamic offensively this season is the emergence of Jefferson as a trusted scorer in the starting unit. Jefferson struggled mightily a year ago, and felt lost in the offense.

During the offseason, Jefferson spent more time with head coach Gregg Popovich and learned how to play off of Duncan, Parker and Ginobili instead of getting in their way. Jefferson realized that to be effective in the Spurs’ system he needed to improve on his jump shot, especially on the corner where previous Spurs Bruce Bowen and Sean Elliott made their living.

Occupying the role of Malik Rose is second-year man DeJuan Blair. Blair is a second-round draft pick who has become the team’s starting center. Most teams passed on the former Pitt Panther because of his size (6 feet 6 inches tall) and bad knees, but the Spurs saw something in Blair much like they saw something in Rose, who was also 6-6.

Though undersized, Blair is an active body in the paint and he uses his girth to his advantage. Against the Lakers on Dec. 28, Blair had 17 points and 15 rebounds and thoroughly outworked the taller Lakers’ big men.

“The San Antonio Spurs do a better job of drafting players than anybody. They find those hidden gems,” says former NBA player Charles Barkley.

Another hidden gem the Spurs found was George Hill. Because he came out of IUPUI, Hill got lost in the shuffle during the draft process in 2008. The Spurs took him with the 26th pick in the first round, and Hill has turned out to be a steal. Popovich loves him, and thinks he can turn into a lock-down defender. Think of Bruce Bowen without all the slapping and flopping, and much more gifted athletically.

The Spurs and their new-look offense have taken the league by surprise early, and by the time the league catches on the Spurs may have home-court advantage throughout postseason.