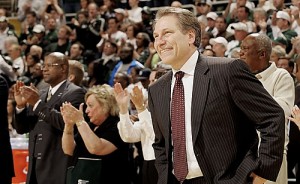 Even though Michigan State lost in the NCAA title game, Coach Tom Izzo and his Spartans gave the state something to smile about (DETROIT NEWS)

Michigan State’s incredible run in the NCAA tournament not only lifted the spirits of an entire state but it also secured Tom Izzo’s place among the elite coaches in the sport.

Despite losing badly to North Carolina in the championship game before 72,000 pro-Michigan State fans at Detroit’s Ford Field, Izzo’s Spartans provided Michiganders an emotional outlet, something to think about other than bailouts and a rising unemployment rate.

“For one week, we’ve managed to put a smile back on people’s faces,” said Magic Johnson, who 30 years ago led Michigan State to the school’s first national championship. Johnson has been very visible throughout this year’s tournament in support of his alma mater and is a big supporter of Izzo.

While the NBA has become a players’ league, college basketball is, and always will be, a coaches’ league.

Having a great leader on the bench is paramount toward building a successful program. Kentucky has $31 million reasons why it hired John Calipari and Missouri showed its commitment to winning by signing Mike Anderson to a lucrative seven-year deal. Roy Williams pulled North Carolina out of its dark days under Matt Doherty, and Michigan State would still be stuck watching old tapes of Judd Heathcote’s 1979 team if it weren’t for Izzo.

Izzo’s ability to convince his players that rebounding and playing defense are almost as important as eating and breathing is beyond X’s and Os. If Izzo asked one of his players to jump in Lake Michigan, they probably would. The Iron Mountain, Mich., native has “master motivator” written on his calling card and has also proved that he can outwit and outplay any opponent.

In the Midwest Regional final against Louisville, Izzo managed to control the tempo by having his players crash the boards and denying Rick Pitino’s Cardinals from running their normal sets. In the national semifinal game against Connecticut, Izzo changed up and picked up the pace and did not allow the Huskies and their 7-foot-3 shot-blocker, Hasheem Thabeet, enough time to set up on defense.

Though Izzo and his band of no-names came up short in the title game, it was not because the Spartans were outworked or outplanned. They were simply overmatched by the enourmously talented Tar Heels, which boasts at least five NBA prospects.

When North Carolina and Michigan State met last December, the Tar Heels ran the Spartans out of the building and won easily, 98-63, so it did not come as a big surprise that North Carolina won, 89-72, in the championship game.

“If we play good and they play good, we’re losing. That’s the way I look at it,” Izzo told the assembled media before the championship game. “I mean, I don’t look at that in the negative. They are the best team in the country and have earned that ranking probably over the last year and a half.”