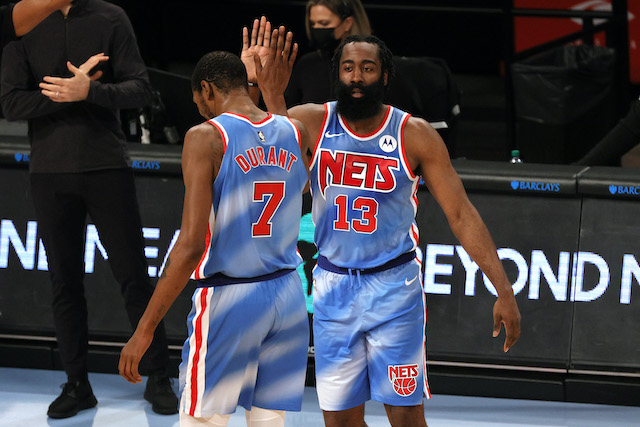 James Harden finally got his wish. He got traded to his preferred destination. For weeks the Houston Rockets tried to make the Harden marriage work, but in the end they had to cut the cord.

The Rockets sent their superstar shooting guard to the Brooklyn Nets, joining his good friend and former teammate Kevin Durant and Kyrie Irving, in a blockbuster deal that involved multiple teams. In return the Rockets picked up a boatload of first-round draft picks and guard Victor Oladipo. To make room for Harden, the Nets shipped Caris LeVert to Indiana, and center Jarrett Allen and forward Taurean Prince to Cleveland.

Harden brings a lot of baggage to Brooklyn. As gifted as he is on the court, he can be a major headache off it. The Beard is a three-time NBA scoring champ and arguably the game’s best one-on-one player. But he wasn’t able to carry the Rockets past the Western Conference finals and his lack of effort on the defensive end is well documented. Harden can wear you out.

He wasted little time celebrating his arrival in Brooklyn, offering a sample of what he can bring to the table by tallying 32 points, 14 assists and 11 rebounds in his Nets debut on Jan. 16 against the Orlando Magic. Durant “chipped” in 42 points.

“We welcome one of the best players in the game to our team,” first-year Nets coach Steve Nash said. “There’s a lot of excitement just on his resume, his talent, and his excitement to be here. The mood is great.”

Nash admitted the Nets will have to learn on the fly and adapt in order to succeed. But make no mistake about it. Harden instantly makes the Nets the most lethal offensive team in the NBA. Nash will have three dynamic scorers in his starting five, all capable of putting up 50 points on any given night. The Nets are also in unchartered territory having so much firepower at their disposal. No NBA team has had three 25-point scorers on its roster since the merger. Durant averages 29.4 points per game and Irving is at 27.1. Brooklyn now has to slide in Harden, who averages 26.4 points per game for his career.

For the past five decades, only the 2017 Golden State Warriors (Durant, Steph Curry, Klay Thompson) and 1983 Denver Nuggets (Alex English, Kiki Vandeweghe, Dan Issel) came the closest to having three 25-point scorers. Both teams had two players over 25 PPG but the third scorer maxed out at 22 PPG.

Nash doesn’t seem too concerned on how to divide up the shots.

“Kevin is the most adaptable because of his versatility,” Nash said. “He can play anywhere on the floor, he can play with or without the ball. For Kevin, it’s the easiest transition. And he’s quite happy to move around and play different roles. And he’s been through it [with Warriors].”

Most recent championship teams with a collection of three superstars — also known as the Big 3 era — eventually morphed into the Big 2 + 1. San Antonio’s Big 3 of Tim Duncan, Tony Parker and Manu Ginobili didn’t start many games together as Ginobili mostly came off the bench. Kevin Garnett often deferred to Paul Pierce and Ray Allen on the offensive end during their time in Boston. Chris Bosh took a backseat to LeBron James and Dwyane Wade while the trio were in Miami. The Big 3 formula was a resounding success in Golden State, but Durant didn’t have to pry the ball away from Curry or Thompson because both are outstanding catch-and-shoot snipers.

Time will tell if Harden, Kyrie and KD can co-exist without having to sacrifice shots. It’ll likely take a few games before we fully see what the Nets’ Big 3 can do.

The Nets are currently a middle-of-the-road in terms of defensive rating and near the bottom in the league in points allowed. And that was before they lost a major defensive presence in center Allen and LeVert, who averages 1.1 steals a game. The Nets are vulnerable against dribble penetration, and will have to hope veteran center DeAndre Jordan can summon his past defensive prowess. Even though Durant appears to have recaptured his offensive game after Achilles surgery, the injury has taken some of his explosion away and isn’t the same defensive player.

When Irving was with the Cavaliers, LeBron James and Co. would cover up for him and limited his exposure against quicker guards. Mike D’Antoni’s Rockets did the same for Harden, as they often stationed Harden in the back end of their defense so he doesn’t get exposed. D’Antoni now serves as Nash’s assistant in Brooklyn. The two great offensive minds are going to have to figure out a way to hide both Harden and Irving on defense.