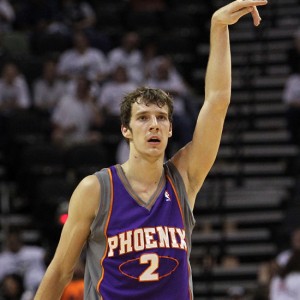 Those who watched the Phoenix Suns take apart the San Antonio Spurs in the fourth quarter of Game 3 of their best-of-seven Western Conference semifinal series were all wondering the same thing: Who is Goran Dragic?

Spurs coach Gregg Popovich is probably losing sleep right about now thinking about Goran Dragic, who had scored just four points in the first two games of the series.

Spurs point guard Tony Parker is probably watching tape right now trying to figure how he got outplayed by a second-year guard playing in his first postseason.

And it’s a good thing Alvin Gentry is the head coach for the Suns because Mike D’Antoni would never have played Dragic deep into the fourth quarter in an important playoff game.

Through the first three quarters, Dragic had just three points. But something happened in the fourth quarter and Dragic caught lightning in a bottle, scoring 23 of his team-high 26 points in the fourth to lead the Suns to a stunning 110-96 victory in Game 3 and take a commanding 3-0 series lead.

Dragic and Leandro Barbosa led a Suns second unit that helped the Suns outscore the Spurs 39-24 in the fourth quarter. The Suns benched outscored the Spurs, 48-28, for the game.

“Steve who?” Gentry asked reporters during his postgame news conference, poking fun at the fact that he didn’t need his All-Star guard because Dragic played so well down the stretch.

The Suns’ backup point guard was a perfect 4-for-4 from 3-point range in the fourth quarter, and when he wasn’t nailing outside shots he was destroying the Spurs interior defense with his dribble penetration and some clever footwork and lefty floaters in the paint.

“Obviously, LB and Goran played great in the fourth quarter. They just stepped it up,” Gentry said of his backup guards, who combined for 39 points and seven 3-pointers. Barbosa had 13 points in 18 minutes and made five of seven shots from the field.

[The Spurs] were switching and we said we had to attack the switches, and I thought [Goran] and LB did a great job attacking the switches,” said Gentry, who should be credited for staying with his second unit for the entire fourth quarter.

“When we put him in the game, we told him ‘You have to be aggressive,’ ” Gentry said of Dragic. “Even at the chance of making a mistake he’s gotta be aggressive because when he is I think people forget what a great athlete he is. He’s as fast with the ball than anyone we got on our team. When he’s playing with confidence, he’s got a lot of tricks and shoots the ball exceptionally well.”

“I love that kid. He’s a teacher’s pet, and he has worked so hard to get to where he is right now,” Gentry said of the 6-foot-3 guard from Slovenia, who was acquired by the Suns through in a draft-day trade in 2008. “He’ll do anything to please the coaching staff and the guys on this team. I’m just happy for him. You won’t meet a better kid.”

With Dragic and Barbosa taking turns in creating offense for the highest scoring team in the league, the Suns were able to chip away at the Spurs’ lead and Barbosa’s layup and 3-pointer with less than 10 minutes left in the fourth gave the Suns an 80-76 lead.

“It’s been tough for Leandro simply because J-Rich is playing so well there hasn’t been a lot of time for LB to play. But when he’s gotten in there, he’s done some good things,” Gentry said of Barbosa.

The Spurs now face elimination, and no team in NBA history has won a series after being down 0-3.