After tugging a 7-foot-1, 330-pound weight on their shoulders the past two seasons, the Phoenix Suns appear to have shed the Shaqles and are back to being the run-and-shoot squad that averaged 58 wins the previous four seasons.

The cast of characters remain with one minor addition (Channing Frye) and one major subtraction (Shaquille O’Neal). But make no mistake about it, Alvin Gentry’s Suns are looking more and more like Mike D’Antoni’s Suns.

Reinstalling D’Antoni’s free-wheeling offense was the best coaching move Gentry made when he took over for Terry Porter halfway through the 2008-09 season. The Suns averaged 117.7 points per game after the All-Star break and, though the team missed the playoffs, won six out of their last eight games. 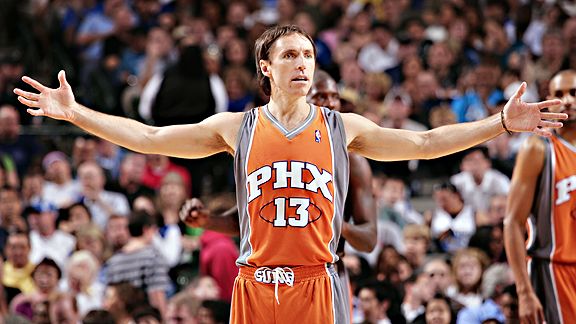 This season, the Suns have picked up where they left off last spring as Steve Nash and Co. have a league-best 109 scoring average (tied with Denver) and a league-best 49% shooting percentage. The red-hot shooting has translated into a fast start as the Suns are well ahead of last year’s pace and in second place behind the West-leading Lakers in the Pacific Division.

Earlier in the season, the Suns concluded an East Coast-trip that saw them go 4-1. The road trip was highlighted by a 110-103 win at Boston and a 119-115 win at Philadelphia, a game where Nash scored 21 points and dished out 20 assists.

The 35-year-old Nash owns a NBA-best 11.5 assists per game and is making 52% of his field goals and 44% of his threes, all above his career averages.

As good as Nash has been in terms of shooting the ball, his statistics pale in comparison to teammate Jason Richardson, who is making 50% his field goals and 44% of his 3-pointers.

Most observers thought Amare Stoudemire would benefit the most from O’Neal’s departure, but obviously it’s Richardson who has really prospered. With Shaq no longer a hindrance on offense, the Suns have been able to fully utilize Richardson’s skills.

Richardson, who along with Jared Dudley, came to Phoenix as part of a four-player deal that sent Boris Diaw and Raja Bell to Charlotte last year. Richardson said it took him a full season to get acclimated to his third NBA team, but now he feels more comfortable with his role in the system.

“They need me to step up scoring a little, and I’m being more aggressive,” Richardson told the Arizona Republic.

Frye was Phoenix’s “minor” offseason acquisition. It’s a minor transaction compared to the big splashes made by the Celtics, Lakers and Cavaliers.

But the 26-year-old former University of Arizona star has been bargain, a move that cost Phoenix just a little more than $2 million for two years. A career 8.4 scorer with New York and Portland, Frye is averaging close to 14 points a game and has already made 25 3-pointers, which is somewhat shocking considering the 6-11 center made just 20 3-point shots in his previous four seasons.

Frye’s new-found long-range game has afforded the Suns to field a starting five who can all face up and make jump shots. This creates more room for Nash and Stoudemire to run their pick-and-roll offense.

The Suns may not be able to chase down the L.A. Lakers in the Pacific Division, but they’ll make a strong case for a playoff berth.