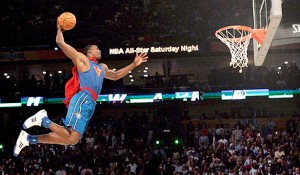 Dwight Howard, also known as Superman II, soared over Cleveland in the Eastern Conference finals and landed in the NBA Finals. (ASSOCIATED PRESS)

Dwight Howard is Superman II. LeBron James is Iron Man. The two collided in the Eastern Conference finals and the end result was a ground-shaking victory for the superhero from Orlando.

Howard, the self-proclaimed Man of Steel, put on his red cape Saturday night, loaded his teammates on his back and lifted the Orlando Magic to the NBA Finals for the second time in the history of the franchise after defeating Cleveland, 103-90, in Game 6 to win the seven-game series at 4-2. The other time Orlando played in the NBA’s biggest stage was in 1995 when Superman I – aka Shaquille O’Neal – was flying high, protecting and serving the people of the Magic City.

You could say O’Neal was Christopher Reeve and Howard is Brandon Routh.

Now that O’Neal is basically retired in Smallville, Ariz., Howard is the new defender of truth, justice and conspiracy theorists. Howard crashed the much anticipated party of Kobe and LeBron, soaring over Cleveland and landing in Los Angeles where Orlando will play Game 1 of the NBA Finals against Bryant’s Lakers.

It’s not the dream matchup Vitamin Water, ESPN/ABC and Nike were hoping for but that’s where we are at. Nike execs are not exactly crying over their Armani suits because they still have the Lakers in the Finals, the NBA’s crown jewel that moves the ratings meter and the franchise with 30 appearances in the Finals.

Maybe the guys in Madison Avenue should flip the script and include Howard in those Most Valuable Puppets commercials. A Dwight Howard vs. Kobe Bryant showdown may not be as sexy, but it has great potential. It’s Superman II vs. The Black Mamba. Or, is it Superman II vs. Darth Vader?

Bryant, the most dangerous player in the league, calls himself The Black Mamba because of his ability to strike rapidly with uncanny accuracy from anywhere on the court. But Kobe loves being the villain. He is at his best when he can sense weakness in his opponent and takes great pleasure in ripping someone’s heart. A huge “Star Wars” fan, Kobe is the perfect Darth Vader – the anti-hero who is cold, calculated and menacing on the outside, but emotionally scarred on the inside.

Kobe won’t easily intimidate Howard and the Magic because Orlando is confident it can stand toe to toe with L.A., having dropped the Lakers twice during the regular season. Orlando is one of the few teams in the league that can match up with the Lakers’ length in the frontcourt and can throw a couple of capable defenders at Bryant in Courtney Lee and Mickael Pietrus.

Conversely, the Lakers have the bigs to lean on Howard and keep him occupied. The game within the game will come down to this: Will the Lakers send a second defender at Howard? Back in 1995, Orlando surrounded Shaq with 3-point snipers, aka the Super Friends, that included Penny Hardaway, Nick Anderson and Dennis “3-D” Scott to prevent teams from crowding O’Neal. This time, the HD version of the Super Friends are named Hedo Turkoglu, Rashard Lewis, Rafer Alston and Pietrus who complement’s Howard’s devastating inside game.

The Super Friends were critical to Orlando’s improbable run to the Finals, but make no mistake about it Orlando’s world revolves around the man with the massive shoulders and wears No. 12. Howard posted superb numbers against Cleveland despite fouling out in three of the six games.

“I believe in my team, first of all, I believe that if we come out every night and play our brand of basketball we can beat anybody,” Howard said. “If we run, defend and rebound we can win a lot of games. Since I’ve been here, everybody has written us off. But we continue to work everyday, we put in the work in the gym to become a better team. We’re not at our best yet, but I’m happy with our progress.

“I think we started to bring back some Magic in Orlando. That’s one of the goals a I set out to do when I first got here. I felt like we were a laughing stock around the league. When everybody played the Magic they thought about Disney World. So, I just wanted to change that.”

In the series-clinching win, Howard changed the flow of the game by establishing his dominance early, scoring 21 points in the first half on 8-of-12 shooting and powered the Magic to a commanding 18-point lead at halftime.

“I don’t know what else he could have done. He was fantastic. He was unbelievable today,” said Orlando coach Stan Van Gundy of Howard. Van Gundy also took a swipe at the perception that Howard is “too nice” or “too goofy” for his own good and does not have the killer instinct to knock out an opponent.

“He was smiling, by the way, and yet was able to play well. Imagine that,” Van Gundy said with sarcasm.

“I thought (Howard) did a lot of great things today. I thought that he protected the basket and didn’t worry about what was going to happen on calls,” Van Gundy added. “And I thought the other thing he did really, really well was run. I thought that wore on them. I thought he was making good plays, scoring when they didn’t double and pass out when they did double. What the post-up game allowed us to do was just settle in, get back and defend them on the break and we can work the clock a little bit.”

Before tip-off, Howard sent one powerful text message to his teammates that really resonated with all of them: “Dominate.”

When Superman has something to say, everyone listens.

“He pretty much carried us on his back. He came out and he was dominant,” Lewis said of Orlando’s 23-year-old All-Star center, who made 14 of 21 field goals, converted 12 of 16 free throws and, according to Cavaliers coach Mike Brown, made the correct play eight out of 10 times when the Cavaliers decided to double team him.

“Dwight was a monster. He was a monster early on. They got a big lead because of it. With the way Dwight was playing, it kinda set the tone for the rest of the game,” Brown admitted.

As dominating as Howard was, James was equally impressive and more than did his part to keep the Cavaliers in the series, winning two games by himself. He won Game 2 with a game-winning 3-pointer at the buzzer that had all of Cleveland rocking. In Game 5, he scored  17 points in the fourth quarter and had a hand in 32 of the Cavs’ final 34 points to send the series back to Orlando.

But Cleveland’s Iron Man finally showed his human side in Game 6. The MVP of the regular season, who entered the sixth game of the series with a robust 41-point average, could not muster another superhuman performance. Hard to blame him considering he had to carry 11 other guys on his bionic shoulders.

James clearly emptied his tank during the series. Prior to Game 6, James’ numbers were astounding: 41 points, 8 rebounds, 8 assists, making 50% of his field goals while playing 44 minutes. But on the night the Cavaliers saw their season come to a bitter end, James was just 8-of-20 from the field, 2-of-8 from 3-point range and limited to 25 points.

While Superman got stronger as the series got longer, Iron Man simply just ran out of energy.