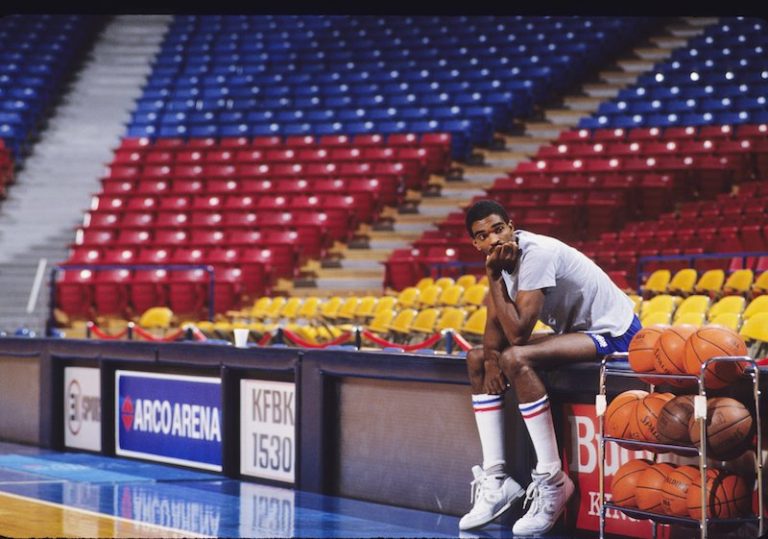 Ralph Sampson sits on a table at Sacramento’s Arco Arena in 1989. (Getty Images)

Ralph Sampson was supposed to be the next great NBA big man. He was supposed to take the baton from Bill Russell, Wilt Chamberlain, and Kareem Abdul-Jabbar and take the center position to a whole new stratosphere.

Sampson was the first leg of a great run of centers in the 1980s that also included Hakeem Olajuwon, Patrick Ewing, and David Robinson. At 7 feet 4 inches tall and could run like a guard and jump like a forward, Sampson had freakish abilities and was revolutionizing the center position. He dominated college basketball for three years as a three-time Naismith award winner for Virginia. He was the No. 1 overall selection in the 1983 NBA draft by the Houston Rockets and was named Rookie of the Year in the 1983-84 season.

When the Rockets paired him up with Olajuwon, the No. 1 pick in the 1984 draft, the Rockets became a powerhouse and the Twin Towers was born. The Rockets reached the 1986 NBA Finals thanks to a miraculous shot by Sampson in the close-out game against the Los Angeles Lakers in the Western Conference finals.

“We all practice crazy shots during practice,” Sampson said of the signature shot of his NBA career. “That shot right there (should be attributed) to Rodney McCray. It wasn’t my shot it was his pass.”

Despite losing to the Boston Celtics in the ’86 NBA Finals, the future appeared bright for Sampson and Rockets. Then came the injuries.

Sampson hurt his left knee during the 1986-87 season but instead of staying on the sidelines he rushed his rehab and played on the bad knee. Sampson told NBA TV recently that he had very little cartilage in his left knee and his decision to return too soon proved to be an epic mistake. His game suffered from it and eventually curtailed his promising career.

“I should have been out for a year but came back after eight weeks because I wanted to play the game of basketball and the sport that I love,” Sampson said. “I probably came back a little too early, but we had a chance to go back to The Finals with the team we had, and I wanted to go back with my teammates.”

Sampson was never the same after his knee gave out. He started having back issues as well and because his body was breaking down his confidence began to sag too. Sampson was eventually traded to the Golden State Warriors in the 1986-87 season for Sleepy Floyd and Joe Barry Carroll. Sampson’s knee and back troubles worsened when he got to Golden State, and he never played a full slate in the next four seasons. He averaged 6.4 points and 5.0 rebounds with Golden State in 1988-89. His NBA career came to an end in 1992 after appearing in just 10 games for Washington.

If you glance at Sampson’s statistical career, you’ll see he had Hall-of-Fame numbers during his first three seasons. Then, you’ll see the numbers begin to plummet and plummet. If the Hall of Fame was just based on NBA stats, Sampson would fall short of the qualifications. But the Hall is more than just about professional stats. Sampson was one of the most dominant players in college basketball and that’s where he made his mark.

Despite all his shortcomings and missed promise, Sampson — who credits coaches Bill Fitch (Rockets) and Terry Holland (Virginia) for his development — has no regrets when he looks back at his basketball career.

“I never say ‘Why’ or ‘What if, What if.’ I know I did my best everyday very hard,” Sampson said. “My career got shortened by injuries, yes. But I enjoyed my time in the NBA, and when I look back I had fun.”