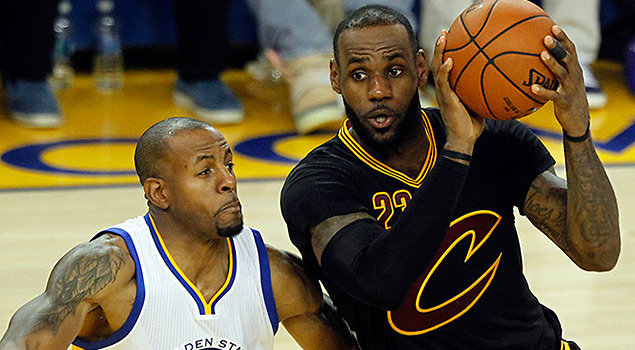 LeBron James and Andre Iguodala battle in Game 7 of the 2016 NBA Finals. (REUTERS)

The story of Cleveland’s sports history has been well chronicled and often mocked. For five decades, Northeast Ohio has suffered through some of the worst moments. The Drive. The Fumble. The Shot Over Ehlo. The Blown Save. The Decision.

Well, Clevelanders. You can finally stop hoping and praying for the city’s 52-year professional sports team championship drought to end. The favorite son of Northeast Ohio, LeBron James, obliterated the curse with “The Block.”

With under five minutes to play in Game 7 of the NBA Finals, the game was tied at 89. The next three minutes became a war of attrition. Neither the Golden State Warriors and the Cleveland Cavaliers could buy a basket. Both teams dead tired. The pressure of a Game 7 and a championship at stake weighed heavily on everyone.

At the two-minute mark, the Warriors thought they had a fastbreak layup to take the lead. Andre Iguodala rebounded a Kyrie Irving miss, dribbled up the court, passed to Stephen Curry, who gave it right back to Iguodala for what appeared to be layup over J.R. Smith. But LeBron somehow found the energy to get back on defense and timed his jump perfectly to pin Iguodala’s shot on the backboard.

Fifty-eight seconds later. Kyrie drained a 3-pointer over Curry from the right wing to give the Cavs a 92-89 lead. Ballgame! Cavs win. Wait over.

LeBron finished with a triple-double. Only the third time that’s been done in a Game 7 of the NBA Finals. But his three blocks may prove to be more important than his 27 points, 11 rebounds and 11 assists.

“Knowing what our city has been through as far as our sports for the past 50-plus years,” James said. “You look back to the Earnest Byner fumble, [John] Elway going 99 yards, Jose Mesa not being to close in the bottom of the ninth to the Cavs going to The Finals in 2007 and getting swept, then last year [losing] 4-2 [to the Warriors]. Our fans, they ride or die. No matter what’s been going on. They continue to support us. For us to be able to end this drought, our fans deserve it. It was for them.

“For me, I’m true to the game. I know what I bring to the table,” James added. “I came back for a reason. To bring a championship to our city.”

LeBron’s chase-down block in the waning moments of Game 7 will go down not only as the signature moment of the 2016 playoffs but it’s the moment Cleveland sports fans can look back and say, “Enough! It’s our time now.”

With one monumental rejection, LeBron James turned the city known as the “mistake by the lake” into the basketball capital of the world.

The Chosen One delivered on his promise.