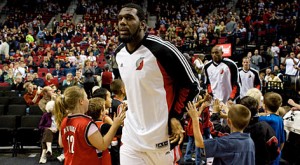 Rookie center Greg Oden has been in and out of the Portland lineup this season because of an unsteady knee. (GETTY IMAGES)

The comparisons are justified and the start of their careers are becoming eerily similar, leading me to believe that Greg Oden is the HD version of Sam Bowie. Ouch!

Back in the 1984 NBA draft, the Portland Trail Blazers committed a basketball sin when they took Bowie, a 7-footer out of Kentucky, and passed on some really good shooting guard out of North Carolina, who just wowed everyone during the ’84 Summer Games in Los Angeles.

Hakeem Olajuwon was the first player taken in the draft and then the Trail Blazers selected Bowie over Michael Jordan. The Blazers reasoned that they already had a budding stud at shooting guard in Clyde Drexler and clamored for a big guy. 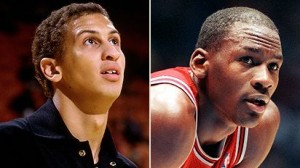 Portland has not been able to live down the selection of Sam Bowie over Michael Jordan in the 1984 draft.

Blazers management asked for the opinion of Jordan’s Olympic coach, Bob Knight, to get a feel for their option 1A. Knight told Blazers brass that Jordan was the real deal and he’s a can’t miss prospect that could become super, super star. Portland gave Knight the same reasoning, saying the ballclub had a pressing need at center. Knight replied: “Put (Jordan) at center. He’s that good.”

Fast forward to the 2007 NBA draft where the Blazers were caught in the same predicament. The consensus choice was to take the 290-pound center from Ohio State, Greg Oden, instead of the wiry high-scoring forward out of Texas, Kevin Durant. So far, Oden hasn’t had enough court time to warrant a debate. Durant is the modern-day George “Iceman” Gervin while Oden can’t seem to escape the shadow of gimpy Trail Blazers big men such as Bowie and Bill Walton.

Whether it’s some sort of curse or just really, really bad luck, the last 30 years has not been good to Trail Blazers’ centers. Walton helped the franchise win its only NBA title but his career has been rendered incomplete because of a chronic foot injury. Bowie’s plight has been well documented, then came the tragic death of Kevin Duckworth last April. He was just 44 years old.

Oden never had any knee problems in high school, and although he missed nearly half of his season at Ohio State because of torn ligaments in his right wrist, his knees were sound during his one season in Columbus. But just months into what would have been his rookie season in the NBA in 2007, Oden went to have his knee scoped but doctors discovered that he needed microfracture knee surgery to repair the damage.

The injury bug just kept following Oden. In his first NBA game, he sprained his ankle during a nationally televised game against the Lakers. Then, his knee started swelling up, causing him to miss two weeks.

Statistically, Oden and Bowie are equals. In fact, Oden’s stats are slightly lower than Bowie’s. In 48 games, Oden is averaging 8 points and 7 rebounds. He has missed 21 games this season. Bowie averaged 10 points and 8 rebounds during his rookie year in 1984-85. He played 76 games that season. The next three seasons, Bowie’s leg gave out and he was limited to 38, five and 20 games, respectively.

Frustrated by the injuries and his inability to live up to the massive hype bestowed upon him since draft day, Oden has looked lost, at times, and can’t seem to stay upright long enough for Blazer fans to feel good about his future.

The future is bright for Portland, with young studs such as Brandon Roy, LaMarcus Aldridge, Travis Outlaw, Nicolas Batum and Rudy Fernandez blazing the trail. Just not sure if Oden will be a part of that future.