Julius Erving made his Sixers debut in 1976 and retired a Sixer in 1987. (GETTY IMAGES)

Every basketball fan who grew up in the 1970s and 1980s has an unbelievable Doctor J story. I have mine, too.

Julius Erving was my first basketball hero. Before Jordan, LeBron, and Kobe, there was Dr. J. He was Michael Jordan before Michael Jordan. Most of the spectacular dunks and aerial artistry we see in today’s game was all because of Doc. He introduced streetball to the basketball world.

I was 10 years old when I first Erving. He appeared in a 1981 Converse Shoes of the Stars TV commercial. I still remember the jingle.

“Say hey, Dr. J. Where did you get them moves. You move with such grace, are you a member of the human race.”

First I thought his name was Dunker J because all he did was slam the ball through the basket, and I thought Dr. J was an odd nickname for a basketball player who doesn’t have a Ph.D.

I got my little rubber basketball and started dunking on my 6-foot rim in our backyard. I also began watching a lot of Philadelphia 76ers games, and asked my mom to buy me NBA Digests so I can read about my new hoops hero.

For my 11th birthday I asked my dad to buy me a Julius Erving 76ers No. 6 jersey. My dad got the jersey, but there was one problem. The back of the name on the white shirt read “Erning.” The jersey-maker had never heard of Erving, so he assumed the name was “Erning.”

I was so embarrassed. But it didn’t stop me from wearing it. I still wore it to a few pick-up games with my friends and nobody seemed to notice. A few weeks later, my dad returned the jersey and had the typo corrected.

My quirky Julius Erving story may not be as spectacular as some of the stories that were told in the documentary “The Doctor, ” which recently aired on NBA TV, but it’s a tale I will never get tired of sharing.

The basketball community has many Dr. J stories.

Leon Saunders, Erving’s Roosevelt High School (N.Y.) teammate and friend, recalled how he came up with a nickname that has stuck more than 40 years later. Erving playfully called Saunders “The Professor” and Saunders, in turn, referred to Erving “The Doctor.”

Roosevelt High School basketball coach Ray Wilson once saw Erving on the blacktop and saw him take off from the foul line. Wilson said he seemed to “glide” to the basket for a dunk and didn’t make a big deal of it.

The legendary tales grew when Erving took his game to famed Rucker Park in Harlem.

Former Rucker League coach John “Butch” Purcell said Erving threw down dunks no one has ever seen before, including a play where he took a halfcourt pass from former North Carolina All-American Charlie Scott and slammed it home while still in the air. We now call those plays alley-oops.

Former New York Knicks player and Rucker hoopster Tom Hoover said Erving dunked on him so hard that when the ball hit him on the face and lost a few of his teeth. 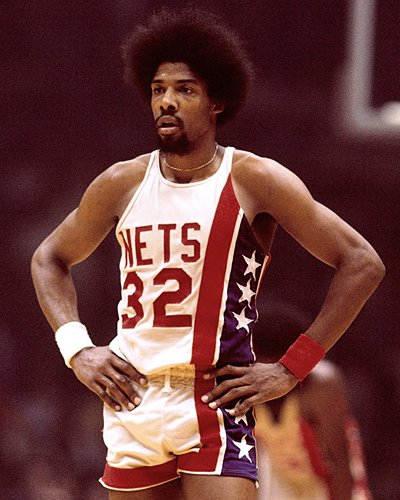 Erving was called Little Hawk, The Claw, and Black Moses. He hated every one of those monikers. He finally set the record straight by telling everyone and anyone who would listen that he prefers to be called The Doctor, the nickname given to him by Saunders.

Tiny Archibald said Doc drew huge crowds at Rucker Park that people were perched on rooftops, freeways, and some sat on tree branches just to catch a glimpse of The Doctor.

“Dr. J was the epitome of cool. If you looked up the definition of cool in the 1970s it says see Julius Erving” USC professor Todd Boyd said.

During the early ’70s Erving became the face of the ABA. The ABA did things differently than the uptight NBA, and it was the perfect venue for Erving to display his streetball skills. For those who were fortunate enough to see him live, they were completely mesmerized. For those who saw him on small highlight packages, they were clamoring for more.

The signature moment of Erving’s ABA career occurred during the 1976 ABA Slam Dunk contest held at McNichols Arena in Denver. The contest included legends George Gervin and David Thompson. But everyone knew who was going to take home the title.

Dr. J warmed up the crowd by grabbing the rim with his left hand and throwing down the ball with his right. He then dunked two balls with ease. But he saved his best for last when jumped from the free throw line and glided through the air for a historic one-handed slam.

“It was bigger than we thought. It’s now 2013 and we’re still talking about it,” Gervin said.

You know you’re great when your peers are throwing down the accolades. When Erving took his game to the NBA, the basketball world finally got a chance to see the legend.

Former Boston Celtics forward Cedric Maxwell remembered a game at the Philadelphia Spectrum when seemingly everyone in the arena had their eyes fixed on Dr. J for one play. “All of a sudden I see 18,000 people rise to their feet, and I’m thinking ‘Holy sh*t, something bad is about to happen here,” Maxwell said.

“Doc picked the ball up with one hand without even touching it with the other one and windmilled this thing like arms stretched like a rubber band. Boom! The crowd went crazy,” World B. Free said of Erving’s dunk against the Portland Trail Blazers.

“He was the first guy that ever saw with air brakes. Air brakes,” Darryl Dawkins said. “He was going to the basket straight then all of a sudden … errr! … he would go sideways.”

Erving’s ability to change directions in midair was on full display in Game 4 of the 1980 NBA Finals against the Los Angeles Lakers. “Man, he did a move that was the all-time greatest move I’ve seen,” said Magic Johnson. “When we cut him off baseline he started walking in the air. I said ‘Wait a minute he’s got to come down. Ain’t no way he can stay in the air that long.

“Coop and I were like … oooh. Can we ask him to do it again because we’ve never seen anything like that before. It was crazy.”

Erving is 63 years old now and based on the footage we saw in “The Doctor” documentary he can still dunk a basketball. While most superstars burn out and fade into our distant memories, Dr. J’s star seems like it’s still shining bright. He gave us so many unforgettable moments that we remember those more than some of our family history.

The great American poet and “The Doctor” narrator Chuck D said it best. Julius Erving’s legend is incredible, but the real stories are even better.