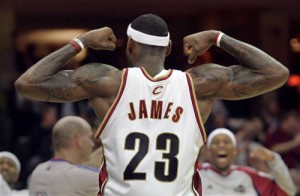 Predicting which team LeBron James chooses to sign with is kind of like forecasting when or where the next earthquake will hit. Amid all the speculation and so-called experts’ opinions on where James is going to play next season and for years to come, the reality of it is this: no one knows for sure what the two-time NBA MVP will do.

Actually, there are a few things we know for sure: the Los Angeles Clippers have NO SHOT at signing LeBron James. Let’s just get that out of the way. And the New Jersey Nets are only in the running because LeBron doesn’t want to embarrass his good friend Jay-Z.

So, that leaves four teams in the hunt: Miami, Chicago, New York and Cleveland.

LeBron and his management group, also known as The Four Horsemen from Akron, are keeping a very tight lid on the situation and only LeBron knows what LeBron wants. For now, LeBron is telling everyone to wait in line before he serves up his decision, which comes at 9 p.m. EST today and televised live by ESPN.

Have I mentioned that the Clippers have no shot? Just checking.

A one-hour special on the Worldwide Leader? Really? Seriously? This is utterly ridiculous. No one player in the NBA deserves this much power and this much attention.

Thanks to Team LeBron – comprised mainly of his buddies from high school and led by a guy named Maverick – ESPN’s family of networks have morphed into LeBron TV. Each time you tune in there is some news about LeBron James and his free-agency decision.

He made the jump from high school to the NBA, so he never experienced the whole college recruiting process. He’s definitely making up for it, though. No matter how sophomoric the idea is, it’s definitely LeBron’s way of reliving college without having to attend classes. It wouldn’t surprise me if James lined up baseball caps in front of him, the same drama-filled moment when a high school kid makes his college commitment.

Maybe, LeBron should do the show “Rock of Love” style with LeBron playing the role of Bret Michaels. But instead of backstage passes, LeBron should hand out headbands to the winning suitors. I’mwilling to bet the Clippers would be the first team dismissed. Just a gut feeling.

I can see it now. LeBron, while holding the last headband, asks Cavaliers owner Dan Gilbert how much Cleveland loves him. Then, Bron-Bron turns to Heat owner Micky Arison and asks him if South Beach is big enough to house three basketball All-Stars.

But I digress. So, again, why is LeBron going on national TV to announce his intentions? He could have done so through a live press conference holding his kids, just like every other athlete who takes the podium. Hasn’t he gotten enough coverage the past month (the past two years if you’re a Knick fan)? If he has indeed already made up his mind to move to Miami, why would he subject Cleveland fans – the very people who worship the ground he walks on – to a very painful rejection and completely humiliate them publicly?

Spurning the Cavs would be like to stabbing your best friend in the heart in front of all your closest friends and family, and making your mom clean up the mess. OK, maybe that’s a bit extreme but you get the point.

Dru Joyce, James’ high school coach at St. Vincent-St. Mary, once said that LeBron is an entertainer and enjoys a little drama. Joyce knows LeBron really well, and maybe he’s on to something. This certainly explains all the bells and whistles of Thursday’s one-hour made-for-TV event. It’s all about feeding LeBron’s massive ego.

Dwyane Wade and Chris Bosh stole some of his thunder Wednesday when both announced that they would team up in Miami. But Thursday belongs to LeBron and only LeBron. If this doesn’t satisfy LBJ’s insatiable appetite for attention then nothing will.

It was bad enough that he made high-ranking representatives from the Nets, Clippers, Knicks, Heat and Bulls fly to Cleveland to meet with him and his LRMR team. Each team gave three-hour presentations on how much they would love to have LeBron. For lack of a better term, it was three hours of “ass kissing.”

As much as I hate to admit it, I’ll probably end up watching the LeBron James TV special. Sadly, it will be a ratings bonanza, with special interest from audiences in New York, Chicago, Miami and Cleveland. It’s like watching a bad Ben Affleck movie. When there is nothing else good on the TV guide, you are forced to watch it because you want to see how it ends.

Whatever the end result of this long, unnecessary, dragged-out process, James will be portrayed as an egotistical superstar who is way too in love with the spotlight. He will also be vilified in a lot of cities, but nothing compares to what Cleveland will unleash on him if he doesn’t stay with the Cavaliers.

If James decides to turn his back on the Cavs, he may not be able to return to his home in Akron. It would be comparable to Art Modell moving the Browns to Baltimore.

Brace yourselves Cavs fans. There is a good chance this story may not have a happy ending.