Because of the lack of star power currently competing in the FIBA World Championship in Turkey, some members of the basketball media have tabbed this year’s event as the “B-rated” championships. But don’t tell that to the individuals who have clearly set themselves apart from the rest of the competition and put together A-plus performances in the preliminary round.

Without a doubt, having international superstars such as Kobe Bryant, LeBron James, Dirk Nowitzki, Pau Gasol and Manu Ginobili in the tournament would certainly boost interest. For whatever reason, all of them have decided to sit out this year’s world championships. They’re all entitled to a well-deserved break especially Nowitzki, Gasol and Ginobili, who have given up countless summers to play with their national teams.

However, one man’s loss is another man’s gain. OneManFastBreak.net publisher and editor Joel Huerto picks the five best players at the 2010 FIBA World Championship: 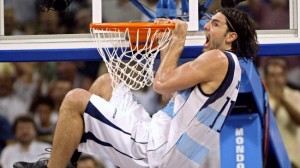 LUIS SCOLA, Argentina, forward: The 6-foot-9 power forward has been arguably the best player in the tournament and is the biggest reason why Argentina went 4-1 in Group A. He is averaging a tournament-best 29 points per game and leads the team with seven rebounds. Despite not being blessed with great athletic ability and size, Scola is able to dominate by being crafty. He has a very high basketball IQ and is seldom caught out of position. He has a nice face-up jump shot at the free throw line, and has an array of very efficient low-post moves that doesn’t require a lot of jumping. A veteran of countless international competitions and a member of Argentina’s gold-medal team at the 2004 Olympics in Greece, Scola is also a tough-minded individual who doesn’t back down from anyone. He is not considered to be a lock-down defender, but he moves his feet well on defense and takes charges in the lane.

KEVIN DURANT, United States, forward: Though Durant says Chauncey Billups is the leader of Team USA, it is quite obvious that the Oklahoma City Thunder All-Star is the reason why the Americans have a great shot at winning gold in Turkey. Durant could easily average 30 points at the FIBA Worlds, but because the U.S. is so deep and talented he doesn’t have to be a volume shooter every game. Coach Mike Krzyzewski has been playing Durant at power forward much of the tournament to create some major mismatches. The 21-year-old scoring wizard ranks fifth in scoring at 17.8 per game, but he’s only averaging 24 minutes of playing time. Durant also ranks second on the team in rebounds (6.2), just a shade behind team leader Kevin Love (6.6). Durant’s value will only increase as the knockout round approaches, and the young superstar should be up to the challenge. 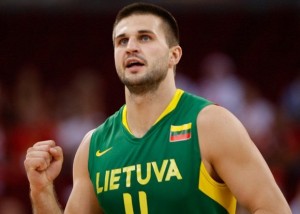 LINAS KLEIZA, Lithuania, forward: The latest in the long line of great Lithuanian ball players, the former Denver Nuggets and current Toronto Raptors sharpshooter is just a notch below Durant among the top scorers at the FIBA Worlds. Kleiza, who is tied with Argentina’s Carlos Delfino at 17.4 points per game, is making 58% of his field goals and one of the main reasons why Lithuania went 5-0 in pool competition and finished first in Group D. The 6-8 forward is a very confident player, and even when his jump shot is off he always seems to find a way to score. He’s got a true scorer’s mentality and he is not afraid to take and make the big shot. 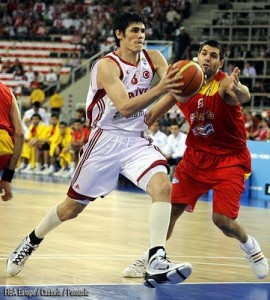 ERSAN ILYASOVA, Turkey, forward: Lost in the giant shadows cast by countrymen Hedo Turkoglu and Mehmet Okur, the rest of the world are beginning to take notice of Ilyasova. The 6-10 forward from the Milwaukee Bucks is having a coming-out party of sorts at the FIBA Worlds. His 16.5 points and nine rebounds per game are solid, but his most impressive statistic is his shooting percentage from behind the 3-point line. In four games, the 23-year-old marksman converted 12 of 20 3-pointers for an eye-popping 60%. He saved his best game against the best competition when he lit up Greece for 26 points on 6-for-6 3-point shots. Thanks to Ilyasova, the host nation went 5-0 in Group C. 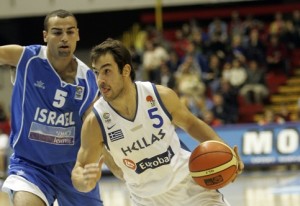 VASSILIS SPANOULIS, Greece, guard: Guard play has been outstanding throughout the tournament, especially at point. The U.S. has gotten great play from Billups, Derrick Rose and Russell Westbrook, Spain has a budding super stud in Ricky Rubio, Brazil is in the round of 16 because of the steady hand of Marcelo Huertas and Serbia is fueled by Milos Teodosic. But when you look at the overall picture, putting a premium on leadership and offensive efficiency, there is nobody better than Spanoulis. The 6-4 point guard leads Greece in points per game (14.0) and 3-point field goal percentage (46%). And his 52% shooting percentage from the field is amazing for a guard. His 2.2 assists per game doesn’t do him justice because he’s one of the best pick-and-roll guards in the world. Spanoulis is Greece’s barometer. When he plays well, Greece wins. When he doesn’t (like against Turkey), Greece loses.