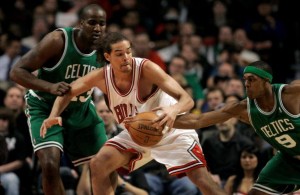 Joakim Noah (middle) made a great defensive play for Chicago late in Game 6 and Rajon Rondo (right) could not deliver the game-winning shot for Boston.

Overtimes, buzzer-beaters, late-game heroics, flagrant fouls and one bloody nose.  Game 6 between the Boston Celtics and Chicago Bulls was an instant classic. The whole series has been one for the NBA archives. Four of the six games have gone into overtime (seven overtimes total) and five of the six games have been decided by five points or less. In the words of the great lyrical poet Kanye West, this series has been “So amazing … So amazing … So amazing.”

You have to go back to the early 1980s to make a comparison. The Boston Celtics and the Philadelphia 76ers waged a seven-game Eastern Conference war in 1981 and again 1982, with the Celtics winning in ’81 and the Sixers winning in ’82. Those two battles produced many, many memorable plays and earned Sixer guard Andrew Toney the nickname “Boston Strangler” for his penchant for silencing the Boston Garden crowd.

The only difference between this season’s Boston-Chicago showdown and the epic battles in the ’80s is that the stakes were higher for Boston and Philly. The 2009 Boston-Chicago matchup is being played out in the first round, whereas Larry Bird’s Celtics and Julius Erving’s 76ers went head to head in the conference finals. But that should not minimize the greatness of this year’s playoff series.

Bulls point guard Derrick Rose, the 2008-09 rookie of the year, got the party started with a 36-point performance in Game 1 to briefly steal home-court advantage away from the Celtics. Game 2 saw a UConn shootout between Ray Allen and Ben Gordon. Despite Gordon’s 42-point effort, it was Allen who had the last say when he buried a trey over 6-11 Joakim Noah for the game-winner. After Boston wrestled home court back with a blowout victory in Game 3, the Bulls tied the series at 2 by winning Game 4 in overtime.

Things got heated in Game 5 in Boston as Rajon Rondo gave Brad Miller a dose of his own medicine but smacking him so hard on the face that Miller’s head was still ringing when he missed both free throws, and the Celtics escaped with a 106-104 win.

But the first five games were all trumped by Game 6. There were not enough superlatives to describe Thursday night’s game at the United Center in Chicago.

John Salmons channeled his inner-Jordan, dropping 35 points on the C’s despite logging 59 out of a possible 63 minutes of court time. Miller, the goat of Game 5, scored 23 points and grabbed 10 rebounds in 34 minutes off the bench. On the other hand, Allen played like a God in Game 6, channeling his inner Jesus Shuttlesworth, swishing two miraculous shots in two of the three OTs just to keep the game going. Ray-Ray lit up the Bulls for a record-tying nine 3-pointers en route to a 51-point performance in 58 minutes, and STILL his supernatural effort was not enough to save the Celtics. Rondo – who has been nothing short of brilliant in the series, averaging a triple double entering the sixth game – had 19 assists and played another solid all-around game. But Rondo could not deliver in the clutch as his potential game-winning shot was blocked by Rose to secure the Bulls’ 128-127 triple-overtime victory.

Allen said he wished he could have done more. “When you are on the losing end, you think about all the (plays) you missed,” Allen said. Hard to blame a guy who just dropped 51 points and hit the 3-pointer that sent the game into a third OT. If there is blame to pass around, it should be pointed at Celtics coach Doc Rivers for not giving Allen the ball in the Celtics’ second-to-last possession that resulted in a blocked shot, and at Paul Pierce for his costly mistake.

Pierce, Boston’s go-to guy and the hero of Game 5, had a rough Game 6. He took an inadvertent shot to the nose in the third quarter and briefly left the bench area to have it mended in the locker room. His fatigued legs also failed him late. With the game tied at 123, Pierce coughed up the ball to Noah, who then outsprinted Pierce for an and-one dunk to give the Bulls a three-point lead and send Pierce to the bench after committing his sixth foul.

Game 7 wasn’t so special since both teams looked absolutely gassed. The Celtics were saved by their bench, mainly Brian Scalabrine and Eddie House, to finally eliminate the pesky Bulls and advance to the conference semifinals against Orlando. Though the ending did not live up to the hype, the seven-game series was still one for the history books.