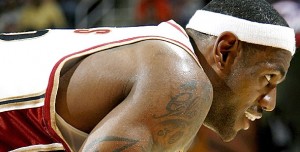 Cleveland Cavaliers Coach Mike Brown said it best. It was an amazing shot by an amazing player.

The legend of LeBron James grew exponentially with his game-winning, buzzer-beating 3-pointer in Game 2 of the Eastern Conference finals against the Orlando Magic in Cleveland that more than likely saved the Cavaliers’ season. The 96-95 victory tied the series at 1 with the next two games in Orlando.

James’ shot over Hedo Turkoglu will now be replayed in the minds of long-suffering Cleveland fans, who until May 22, 2009, has never been able to erase the painful memory of Michael Jordan’s shot over Craig Ehlo 20 years ago. On May 7, 1989, a day that has lived in infamy to many Cavalier fans, Jordan broke free from Larry Nance, dribbled to the top of the free throw line, rose up, hung in the air as Ehlo flew by and rattled home the game-winning shot that eliminated Cleveland in the first round.

It was one of Jordan’s defining moments in the NBA playoffs and the league has milked it to the point where many Jordan-haters, and most of them live in Ohio, are heading for the restroom with one finger in their mouths and losing their lunch in a porcelain bowl.

Enter LeBron James. The Akron, Ohio, native who has witnessed and endured some of Cleveland’s heartaches, changed the course of history with one dramatic shot – a shot that foiled Orlando’s 23-point comeback and a shot taken by No. 23 from 23 feet.

Before The Shot that rocked Cleveland, Turkoglu put the Magic head 95-93 when he swished a jumper from the top of the free throw line. Images of John Elway driving the Denver Broncos 98 yards against the Cleveland Browns, Earnest Byner fumbling the ball near the goal line and Indians closer Jose Mesa blowing a lead in the ninth inning of the World Series began to resurface. Then, with one flick of the wrist, James exorcised Cleveland’s demons.

“I was punch-drunk. I couldn’t move,” said Cavaliers guard Mo Williams, who was credited for delivering a pin-point inbounds pass that allowed an easy catch-and-shoot for James with 1.0 showing on the clock.

James said the initial play for was Williams to throw him the lob pass, but Turkoglu played it well. So, James broke free to the top of the 3-point line, caught the ball, rose up over Turkoglu, released the ball before the red line went on and rattled home the shot that could become the signature snap shot of his career.

“I was going to come get the ball no matter what happened. I knocked down the shot. Biggest shot I’ve made in my career.” James said. “A second is a long time for me, for other it is very short. As a kid you practice those moments … five, four, three, two, one, eeehh! Currr! You don’t have to be in the NBA to know what I’m talking about.”

The magnitude of the shot was not lost on Brown. He knew the Cavs had one shot at either going down 0-2 or tying the series 1-1. “Just to have the wherewithal to have that type of confidence in yourself, to know there’s one second on the clock and you’re ending this thing right now, and if it doesn’t end right now, I have big enough shoulders to take care of what the outcome is,” Brown said. “Not many people could do it.”

Thanks to LeBron James, the city of Cleveland can finally sleep on sweet dreams and not be awakened by the nightmare of Jordan’s Shot, Elway’s Drive and Byner’s Fumble.