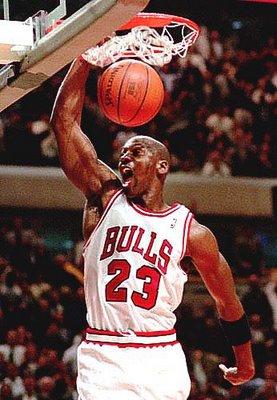 Michael Jordan left a lasting impression in the game of basketball.

Greatness can’t be measured by statistics. True greatness is defined by a player’s legacy. Michael Jordan’s impact in the sport can be seen through his basketball sons: Kobe Bryant, LeBron James and Dwyane Wade.

In a lot of ways, Jordan can be held responsible for practically raising Bryant, 31, Wade, 27, and James, 24, through his profound impact in the game. He educated them in how to work hard, play hard and dominate, setting the bar for them to jump over.

In short, Air Jordan showed his apprentices how to be great.

When we see Kobe, aka The Black Mamba, we see Jordan’s thirst for perfection, his mannerisms and incredible will to win. When we see D-Wade, aka The Flash, we see Jordan’s history in Chicago and the impact he’s had in that community where Wade grew up in. And when we see LeBron, aka King James, we see No. 23. We see the relentless attacking style that Jordan unveiled early on in his career. It is style that features an ability to get to the basket, absorb contact and score, and finishing with power. 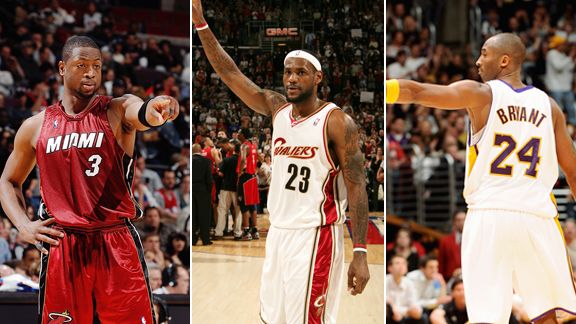 “He’s the master. He’s the guy that really perfected the game. Taught me a lot about the game of basketball, and how to prepare and leadership and competitive spirit,” Bryant said of Jordan, a member of the Naismith Basketball Hall of Fame class of 2009, a class that includes John Stockton, David Robinson, Jerry Sloan and Vivian Stringer.

Because Bryant came into the NBA in 1996, he is one of just a handful of active players who had the opportunity to go head to head against Jordan when he was still considered the Top Gun. Wade and James entered the league after Jordan retired for the third and final time and never got a chance to test their skills against the six-time NBA Finals MVP, five-time regular season MVP, 10-time scoring champion and six-time world champion.

Bryant, Wade and James are no different than any other player in the Association. Even though all three All-Stars have already accomplished a lot in their careers (Bryant is a four-time NBA champion and 2008 MVP, Wade is a world champion and 2006 Finals MVP and James is the reigning league MVP), in some ways they’re still following the template Jordan built more than 25 years ago. In so many levels, they’re all chasing his records, his championships and his enormous fanbase, and jealously admiring the Air Jordan silhouette that is embedded on shoes, billboards, headbands, beverages, baseball caps, sweaters, T-shirts, shorts, sweat pants and socks.

Before Facebook, MySpace and Twitter, people got to see Michael Jordan through the power of videos. VHS style! If you were a true basketball fan, you owned a tape of “Come Fly With Me” and “Michael Jordan’s Playground.”

As products of the ESPN generation, Kobe, D-Wade and LeBron – along with millions of fans around the world thanks to the growth of cable television – got see Jordan up close and personal through video highlights on SportsCenter. They mimicked his every move from the tongue action, to the way he wore his shorts, to the one-handed ball fakes, to the way he licked his fingers and how he chewed his gum, to the way he dominated the basketball, to the way he clamped down on defense and to the way he imposed his signature in each and every game he competed in.

Try watching one of Bryant’s interviews or Wade’s or James’ and tell me how many times they refer to the sport as “the game of basketball.” Kobe just did it a few paragraphs ago. That’s a Jordan influence.

Because of his undeniable influence in today’s generation of superstars, Michael Jordan’s legend has grown exponentially. MJ may be retired but we still see flashes of him.