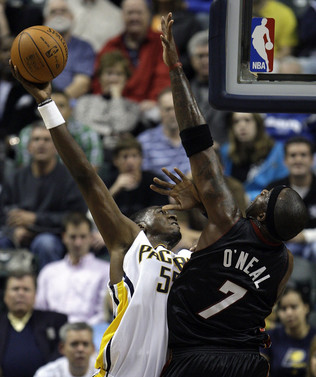 Jermaine O’Neal saw firsthand what super trainer Tim Grover did for Dwyane Wade last season, and he couldn’t think of a better guy to rebuild his body as well as his career.

This past offseason, Grover put O’Neal through a rigorous training regimen that included a new diet and more rehabbing than resting. After two steller outings in two Heat victories, O’Neal seems to have regained his footing as one of the NBA’s best big men.

Thanks to Grover, O’Neal says he feels strong and healthy for the first time in almost three years. The 14-year veteran has publicly stated that he wants to regain the form that made him a six-time All-Star selection.

O’Neal scored 22 points and grabbed 12 rebounds in each of Miami’s first two games, the first time he’s posted 22-and-12 in two years.

“I expect to do it every night,” O’Neal told the Associated Press. “When you go through some of the issues that I went through with my knee over the 2 1/2 years, you look forward to these nights. This is the first time in 2 1/2, three years where I feel real good, the body is responding great, my movements are great, no knee braces. I’ve really looked forward to this.”

So have the Heat, which goes without saying.

They traded for O’Neal last February, desperate for another low-post presence to help All-Star Dwyane Wade. What they got, though, was a player whose knees ached more than he ever acknowledged publicly, who could barely jump or run, impaired so badly that he failed to get more than five rebounds in 14 of the 27 regular-season games he logged with Miami last season.

For a 6-foot-11 player making more than $20 million a year, that simply wasn’t going to cut it.

Clearly, all the hard work that O’Neal put in has paid off and if he can stay painfree for the rest of the season, the Heat should remain one of the top five teams in the Eastern Conference.