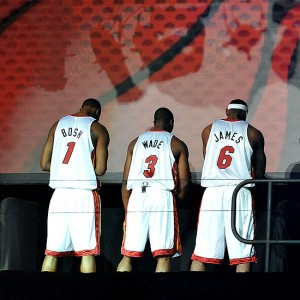 They danced, pranced, giggled and screamed on stage like a bunch of schoolgirls during a screening of “The Twilight Saga.”

There was LeBron James, wearing No. 6 in a Miami Heat uniform and strutting on stage, smiling from ear to ear. Yes, Cleveland. Your worst nightmare has been realized. The former pride and joy of Akron seems to have already assimilated to the splendor and spectacle of South Beach less than 48 hours after he dumped on the Cavaliers on national TV.

There was Chris Bosh, wearing No. 1 in a Miami Heat uniform, wiping his brow with his fingers and posing for the cameras. Of all the free-agent studs this offseason, Bosh is the one who has clearly enjoyed all the attention. Can you blame him? He has been incarcerated in Toronto for seven years! Now, he looks like a guy who just won the lottery and can’t wait to spend his money.

There was Dwyane Wade, wearing his familiar No. 3 Heat jersey, laughing, joking and absolutely giddy like a 10-year-old who just received a brand new Wii console on Christmas. Did anyone really thought Wade was going to leave South Beach? He probably went through with the whole free-agent process just so that he could spy for Pat Riley. The end result was he brought along his super friends with him to Miami – as promised.

Heat play-by-play announcer Eric Reid introduced the trio as “The Three Kings” of Miami. More than 10,000 fans flooded American Airlines Arena flooded the stadium – also known as D-Wade’s House – and couldn’t contain their joy, holding up “Yes. We. Did.” signs and flashing their cameras, hoping to get a picture of the newest rock stars of South Beach.

Wade proclaimed The Three Kings as “arguably, the best trio to ever play the game of basketball.” James followed that bodacious statement by saying the Heat are more than capable of winning “NOT ONE, NOT TWO, NOT THREE … NOT FOUR … NOT FIVE … NOT SIX … NOT SEVEN” NBA championships.

“And when I say that I really believe it. I’m not just blowing smoke at these fans because that’s not what I’m about. I’m about business,” James boasted. “We believe we can win multiple championships if we take care of business and do it the right way.”

LeBron says it doesn’t matter how the rest of the roster will shape up because as long as The Three Kings are on the court, the heat will be on the opponents. “When me and D-Wade are running the wing, I mean, Pat [Riley] can come back and play like was back in his Kentucky days. Just throw it up there and we’re gonna go get it.”

Wade is confident egos and individual accolades won’t get in the way of the 2.0 version of the Miami Heat because the team will be built around one word: sacrifice. “That’s not just from a money standpoint, that’s not just from a shot standpoint. It’s everything. When we step on the court, it’s going to be business. Whoever is going to be a part of this organization is gonna have to make that sacrifice.”

He continued: “Oh, we’re going to have fun. It’s going to be Hollywood down here.”

Wade knows a thing about winning a title. He experienced it 2006 with the help of Shaquille O’Neal and a roster surrounded by veterans such as Gary Payton, James Posey, Antoine Walker and Alonzo Mourning. But this time it’s different. Wade, James and Bosh are all in the primes and none of them are older than 28.

James is the reigning NBA most valuable player and, at 25 years old, he’s barely entering the height of his basketball career. Bosh is 26 and hungry for attention, so he’ll be motivated to soak in some of the spotlight in Miami.

“That’s the only reason why I’m here,” James said of his decision to sign with the Heat because, in his mind, it affords him the best opportunity to win a title. “I’m here to bring another championship, to bring that feeling that you all had a few years ago when y’all was able to win that championship. Me and CB, we’re here to make that feeling come back.”

Bosh gave a glimpse of what to expect when the regular season starts in October. “When I get a rebound, I got LeBron on my left I can outlet to. And I have D-Wade on my right. I’m lucky.”

Somewhere out in L.A., where the Larry O’Brien Trophy sits, Kobe Bryant and Pau Gasol are in the gym working on their shots and dying to get a shot at The Three Kings. The Celtics’ Big Four of Rajon Rondo, Kevin Garnett, Paul Pierce and Ray Allen are probably watching tape right now and formulating game plans on how to defend The Three Kings. Ssomewhere out in Orlando, Dwight Howard is doing extra reps on the shoulder-press machine, physically prepping for his upcoming battles with The Three Kings in the Southeast Division. And Joakim Noah, the Chicago Bulls’ outspoken and highly emotional forward/center, recently branded the Miami Heat as “Team Hollywood.”

Without a doubt, Miami’s Three Kings will have huge targets on their backs this season, but they seem to be up for the challenge.

“We’re competitors. We accept it with open arms. Bring it on!” said Wade.

“That’s why we play this game. We play this game to have those competitive juices,” Wade continued. “We expect those teams to say that. We don’t expect them to say ‘OK, Miami has won it.’ No, we don’t want that. We don’t play so people can just lay down. We want to come out here and give this Miami crowd a show every night, and even on the road because every place will be a sell-out when we come to town. So, they can thank us now.”