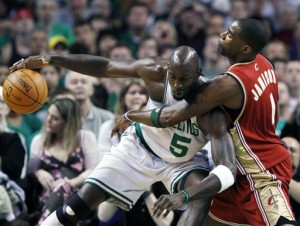 There are some quality players available this summer for those teams that have money under the NBA’s salary cap and here is one jabroni’s opinion on the top talent available:

KG played well in the postseason and showed that he can still bring his A game when needed. For the first couple rounds of the playoffs, he was the NBA’s possible postseason MVP.

He has decided to opt out and test the free agent market. Wallace is an excellent defender that can also provide 15 points per game to a team that needs a third or even a fourth option on offense. And he will get paid.

He might be often injured, but he will be in demand. That’s for sure. When DeAndre Jordan signed a four-year contract worth $12.8 million per season before last season, this assured Kaman will get a very similar deal since he is a better offensive option at center. Kaman would be a very nice fit on a team like the Boston Celtics that need a legit center in the low post.

Humphries isn’t a top 5 PF, but he averaged just under 14 points per game and 11 rebounds per game. He is a solid option that would be a seamless fit for a lot of teams. If the Indiana Pacers hadn’t signed David West last year he would have been a perfect fit on their team. Some team will be very happy with a very good young player.

Talk about a player that took advantage of an opportunity. Dragic averaged 18 points and eight assists per game in 28 starts when Kyle Lowry got injured. He is a good ball-handler, passer and a solid outside shooter.

A lot like Humphries, he isn’t a top-five center, but he is a top-10 center in the NBA. He reminds me a lot of a younger Brad Miller. He’s a good rebounder and passer, a solid scorer and an improving defender.

He can still shoot and would be a solid fit on the Los Angeles Clippers or Chicago Bulls.

He probably isn’t a starter for most teams, but he provides a lot of energy and scoring off the bench.

Bass decided to opt out to test the free agent market after a solid season in Boston where he averaged 12 points and six rebounds.

His starting days might be numbered, but he’d be an excellent sixth man on a contending team that needs instant offense on their second unit. You wouldn’t want to bring him in to start because he tends to be a chucker, but a very viable option as a backup.

Others that are available are:

He is a steady influence as a PG and could play late into his career like Jason Kidd has. His game isn’t built on speed and quickness, but rather intelligence and smart basketball play.

A solid scoring presence off the bench, but he is slowing down a bit.

Undersized tweener forward, but he gets the most out of his talent and plays hard. He hustles and provides a lot of energy off the bench.

Darren Jacks is contributor to OneManFastBreak.net. Email him at djroxalot@gmail.com.