Here are the juiciest stories worth keeping an eye on for this upcoming season:

Artest, LO-Dashian and the Lakers

Ron-Ron said that he’ll be on his best behavior when the real season begins. However, I think the Truwarier is talking about off the court stuff. As far as on the court, his game is about as hard as his deltoids. It’s not going budge. He’s a ground-and-pound player, meaning he likes to dribble away the shot clock and prefers isolations on one side of the court. It will be interesting to see how well Artest embraces the triangle offense.

Now with Artest in the mix, for the first time since 2004 when Shaquille O’Neal left town, Kobe Bryant will have to deal with a BIG personality in the locker room. Add Lamar Odom’s sudden rise to the tabloids’ front pages with his recent marriage to reality TV star Khloe Kardashian, the Lakers will be a traveling rock band and TMZ and the E! channel will never be too far away.

During the Lakers Media Day, Odom refused to comment on his recent marriage to Kim Kardashian’s younger sister. Not sure how long LO will be able to fend off the media, and it’s unrealistic to think that he’ll be able to completely focus on just basketball this season. Stay tuned.

Kobe must be saying to himself: “Thanks, Ron and Lamar, for giving me a break from the media spotlight.”

KG and his knee

The Boston Celtics are still holding their breath to see if Kevin Garnett is completely healed from the knee injury that kept him on the bench throughout the playoffs. Reports say that Garnett has been working out with his team and seems to be coming along nicely. However, once a player suffers a major injury to their knees, they are never the same. Time will tell if KG can overcome this major obstacle. Celtics Nation is on pins and needles. 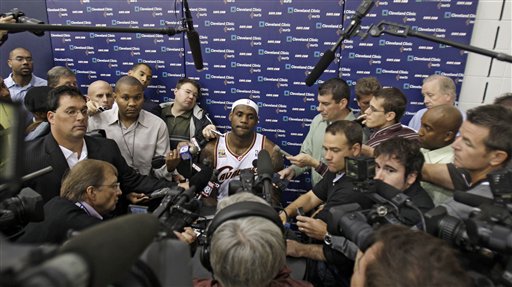 LeBron James is surrounded by microphones and cameras during Media Day. (AP)

Shaquille O’Neal likes slogans as much as he likes nicknames. The Diesel has vowed to “Win a Ring for The King” this season. That’s big talk for a 7-foot-1, 350-pound man. At 37, Shaq is in the twilight of his Hall-of-Fame career and his skills have diminished to the point where he can only rise up every other game. Despite all the kryptonite thrown his way, Shaq is STILL a Superman when it comes to punishing people in the post and he is STILL the second best center in the league behind only Dwight Howard, which speaks volumes about the lack of great big men in today’s NBA.

The San Antonio Spurs have quietly added some key pieces to their championship puzzle. Gone are oldies Fabricio Oberto and Bruce Bowen, and in comes Antonio McDyess and Richard Jefferson. McDyess will be asked to fill the role of David Robinson and be Tim Duncan’s bodyguard in the post while Jefferson will be asked to be the fourth scorer on a team that has relied on the Big Three (Duncan, Tony Parker and Manu Ginobili) for nearly a decade. San Antonio also added two kids to its aging roster with 2008 pick George Hill and 2009 pick DeJuan Blair. Both played well during the summer and should contribute off the bench.

The NBA is prepared to go the entire season with replacement referees as the referees’ union continues to fight for their pensions and benefits. David Stern is not going to be bullied by a bunch of old guys wearing Footlocker jerseys. Rasheed Wallace said: “I know there’s going to be a lot of stupid star calls like it is with the old refs, so I don’t there’s going to be too much change.“