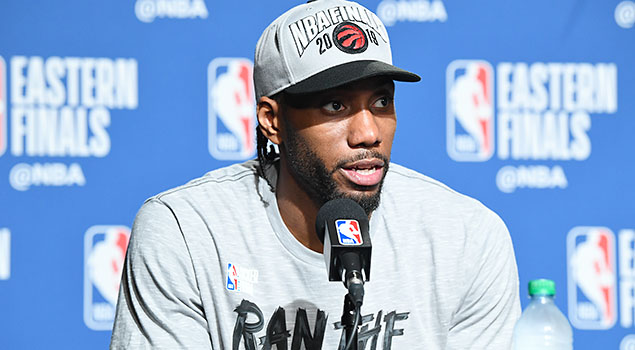 Kawhi Leonard has a big decision this offseason. (Getty Images)

Kawhi Leonard is two wins away from leading the Toronto Raptors to its first ever NBA championship. That’s quite an achievement considering where he was a year ago.

With Kawhi having a memorable playoffs and Golden State all of a sudden looking vulnerable due to a myriad of injuries, online sportsbooks no longer have the Raptors as heavy underdogs.

Should the Raptors somehow pull off the biggest upset in the history of the NBA Finals, Kawhi will have a very interesting decision to make once the offseason begins. Should he stay in Toronto where he has become the most beloved athlete in Canada since Steve Nash? Or should he leave and become a free agent, free to sign with any team who can fit him under the cap?

The allure of free agency and playing for his hometown team – whether it’s the Lakers or Clippers – is truly enticing, especially since Leonard has been hinting at coming home to Los Angeles ever since he had a falling out with the Gregg Popovich and the San Antonio Spurs. Kawhi’s uncle, Dennis Robertson, has reportedly been eyeing L.A. for the last two years, and Toronto was basically a pit stop for the All-Star forward.

But the Kawhi flight to L.A. appears to be delayed. The engine is still running, but the schedule now says “still boarding.”

“I don’t think these guys know anything,” Barkley said. “I don’t think these players know where they’re going. You know how I know that? This is how full of crap all these reporters are. Because all these [players] are caught between a rock and a hard place. They can’t go anywhere by themselves. That’s the biggest problem all these guys got. No matter how great – whether you’re talking about Kawhi, KD, Kyrie [Irving], Jimmy Butler – none of these guys can make a move until something happens.”

Barkley continued: “If you go to a team by yourself, the team is not going to be any good. So that’s what’s going to be very interesting this summer. Who makes the first move. Who’s talking behind the scenes? Because you can’t go anywhere by yourself, or you’re going to be making a lot of money on a bad team.”

What Barkley said made perfect sense. Sometimes the grass is not greener on the other side. Kawhi may not be happy playing for Doc Rivers in L.A. He may not like playing with Patrick Beverley or Lou Williams. He may not enjoy playing in an arena where they use giant selfies to cover up Lakers championship banners.

Kawhi is in a great spot in Toronto, and the Raptors don’t need bring him to the Hamptons to make their best pitch.

He is the unquestioned leader of the team. He has the backing of an entire nation. He plays for a head coach in Nick Nurse who allows him to miss games and manages his workload. He has a very competent general manager in Masai Ujiri. He has a solid supporting cast led by two veterans – Kyle Lowry and Marc Gasol – Kawhi respects and can lean on for support. He is playing with a rising star in Pascal Siakam. And last, but definitely not least, he can make an additional $40 million by re-signing with the Raptors.

There are no guarantees Kawhi will stay healthy for the rest of his career. At some point, he’ll have to think long and hard about his well being. Money can’t buy you love, but it can buy you a lot of homes. A super-max contract affords Kawhi the ability to purchase a home in L.A. and Toronto. He can have the best of both worlds. Live in L.A. Work in Toronto. Sounds like a good deal.