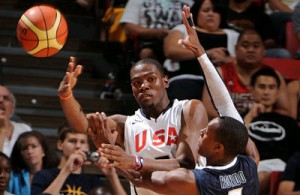 Team USA got a little taste of what the 2010 World Championship will be like when Kevin Durant and Co. struggled against a rugged Lithuanian squad in Saturday’s exhibition game in Madrid, Spain.

The U.S. managed to pull out a 77-61 despite a very slow start. Playing in their first international game outside of the United States, the Americans got off to horrendous start as they missed 24 of their first 26 shots from the field and trailed Lithuania, ranked No. 6 by FIBA, 14-17 in the first quarter.

Durant, the team’s go-to player, struggled with the way he was being played as Lithuanian defenders bodied up against him and didn’t allow him to get comfortable from the get-go. Durant finished with 14 points, but he needs to find a way to overcome the rough tactics of the European teams.

But Durant wasn’t the only American player who got mistreated. Rudy Gay went down hard from a body block in the second half, Derrick Rose got poked in the eye and Kevin Love slammed the back of his on the floor after he took a charge.

After trailing by a point at halftime, the U.S. – aided by some great on-ball pressure from Rondo, Russell Westbrook and Eric Gordon – used a 17-0 run in the fourth quarter to break the game open.

These are the type of difficult games the U.S. team will have to get accustomed to in order to survive and advance in the World Championship in Turkey, which starts on Aug. 28.