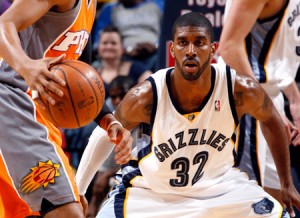 Those who were left off the 15-man roster were guards Tyreke Evans and O.J. Mayo, forward Gerald Wallace and center JaVale McGee were cut. Evans could have made it the final 12-man roster that will represent Team USA at the FIBA World Championships in Turkey, but he missed most of training camp with a sprained ankle. The 2010 NBA Rookie of the Year will get another chance in two years for the 2012 Olympic Games in London.

Because Team USA was already loaded with guards, there was simply no room for a guy like Mayo. The Memphis Grizzlies shooting guard doesn’t really have a specialty and is more of a volume shooter. Coach K and his staff chose to keep shooting guards Eric Gordon, Danny Granger and Andre Iguodala instead.

Wallace could have filled the role of defensive stopper, but his limited offensive skills probably kept him from wearing the USA colors. Coach K and Co. didn’t want to sacrifice a top-notch guard for a small forward with limited range, and Wallace would have been overmatched at power forward.

McGee was a late invite to training camp in Las Vegas after Amare Stoudemire didn’t bother to show up and Robin Lopez has not completely healed from his back injury. Then, two days into camp, forward David Lee dislocated his finger and had to drop out, which gave McGee a glimmer of hope to make the roster.

Despite playing well in the scrimmage showcase at Thomas & Mack Center, McGee was let go as Coach K chose to keep Tyson Chandler and Brook Lopez, two players with a little more playing experience than the 22-year-0ld Wizards center. But the future is very bright for McGee, who dominated the Las Vegas Summer League and should be the Wizards starting center heading into this season. Lopez didn’t particularly play well in the scrimmage, but the 7-foot center is one of the few legit post-up players in camp and the team desperately needs big bodies.

“We do want to see how Brook Lopez looks after two weeks of getting himself in shape,” Colangelo told reporters. “He knows he struggled, he’s disappointed in his performance, but he wants this opportunity and when somebody has that kind of an attitude you’re going to give him a little bit of rope.”

Team USA will take a short break before reopening camp on Aug. 9. The team plays an exhibition game on Aug. 15 against France at Madison Square Garden in New York. It’s the first of four exhibition games for Team USA before it leaves for Turkey. USA Basketball doesn’t need to announce its 12-man roster until a day before the World Championship, which begins Aug. 28.