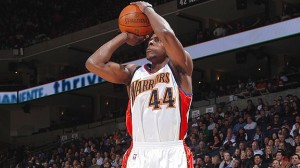 Anthony Tolliver's one-minute video on YouTube has been a huge hit. (ASSOCIATED PRESS)

If his basketball career doesn’t work out, Anthony Tolliver could have a future as a Hollywood actor.

Tolliver reenacted LeBron James’ over-the-top ESPN special and titled it “The Decision: Part Deux!!” The video has been viewed by more than 250,000 times on YouTube since he posted it Friday. Tolliver, a third-year forward from Creighton, posted the one-minute video to announce that he chose the Minnesota Timberwolves over the Golden State Warriors, spoofing LeBron’s made-for-TV event earlier this summer when he announced that was going to “take his talents to South Beach.”

Tolliver was the director, producer, screenwriter and star, with some help from his sister, who ran the camera, and his girlfriend, who played the reporter. “I like to have fun with a lot of things and decided to have a little fun with this,” Tolliver told the Associated Press. “I didn’t expect it to do what it did. I’m a fun-loving guy. I like to have fun so that’s why I did it.”

Tolliver said he didn’t intend to make fun of LeBron, and that he was trying to poke fun at himself.

“A lot of people didn’t like ‘The Decision.’ They didn’t really like the whole hour special on ESPN and stuff like that,” said the 6-foot-9 forward, who played 44 games for Golden State last season. “They were like, ‘Good job making fun of LeBron.’ They have no idea. I wasn’t making fun of LeBron. I was just having fun with the situation.”

The Associated Press contributed to this story.