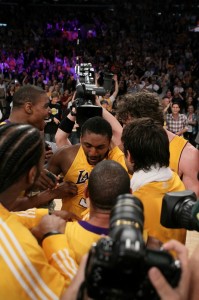 Ron Artest is surrounded by his teammates after hitting the game-winning shot in Game 5. (NBAE/GETTY IMAGES)

Ron Artest waited all season to make his mark as a L.A. Laker and his moment finally came Thursday night.

After the Phoenix Suns rallied from an 18-point deficit and tied the score at 101 with 3.5 seconds left on Jason Richardson’s bank shot from the behind the 3-point line, the Lakers drew up a play for Kobe Bryant to win the game but his shot from near the sideline fell way short. Fortunately for the Lakers, Artest never gave up on the play, grabbing the loose ball and beating the clock with a short, off-balance bank shot that gave the Lakers a 103-101 victory in Game 5 at Staples Center.

“I thought Kobe got fouled on his shot, so I figured it was going to be short,” Artest said of the final play. “I just thought I’d throw my weight a little bit, and let my weight work for me.”

The Lakers now lead the 2010 Western Conference finals, 3-2, with a chance to close out the series in Game 6 in Phoenix.

“It’s amazing you go through all this stuff, all the preparation, and it comes down to fundamental things,” said Bryant. “They knock down a 3-pointer because we didn’t box out, and they wound up losing a game because they didn’t box out. Little things like that are the difference between winning big playoff games and losing them.”

Bryant took the inbounds pass from Lamar Odom, but when he turned to shoot Steve Nash and Grant Hill converged on him and didn’t allow him to get a clean look at the basket.

“I felt I had a great look, but Grant Hill stuck his hand in there at the last second and forced me to double pump,” Bryant said. “Other than that I was gonna shoot over Steve. Once I release the ball I saw Ron sneaking in, and I was just hoping he got it off in time.”

It was easily Artest’s biggest play as a member of the Los Angeles Lakers and it almost didn’t happen because Phil Jackson contemplated about taking him out of the game for taking an ill-advised 3-pointer with under a minute left in the fourth quarter and Lakers ahead by three. “I’ll have a substitute to get you next time, that’s what I said,” Jackson joked. “I don’t know why I left him in the game. I questioned it myself when I put him out there. But there he was made the key play.”

Artest was 1-for-9 from the field prior to the last play, but found redemption by being at the right place at the right time.

“It was a great moment,” said Lakers guard Derek Fisher, who has had his share of game-winning shots during his career. “We’re very happy for Ron because Ron has been asked to sacrifice a lot with his game to really try to fit in on what we do things. He has sacrificed a lot to get to where we’re trying to go. And that’s why we were so happy for him.”

The Lakers led for much of the game but had to withstand a furious Suns fourth-quarter rally led by Nash, who scored 29 points.

“We just didn’t quite finish the play,” said Suns coach Alvin Gentry. “They made a good play. You gotta give Ron Artest credit. He ran down the ball and put it in the basket.”

Gentry continued: “The only thing negative is the way we approached the game a little bit. We weren’t quite as aggressive and they got into us defensively and we struggled a little bit getting into our offense. But on the defensive side of the ball we did great. We’ve now gotten them down from 58 percent to 41 percent. They keep talking about the zone, and our zone has been fine.”

Artest’s last-second shot was the second game-winning putback for the Lakers in the 2010 playoffs. Pau Gasol made a similar play in the first round when he followed up Bryant’s miss to win Game 6 in Oklahoma City.

“It was a crazy game. It had a bit of everything,” Nash said. “We found a way to tie it up and we lost on a last-second putback. Just when you thought everything was OK, and we’re going into overtime, we lose. But that’s life. We take a lot of positives from tonight and we gotta home and play as well as we did in games 3 and 4.

“Everything’s OK. We came back obviously with a great effort,” added Nash. “Maybe we deserved this game, maybe we didn’t. We lost and they held homecourt. We’ll go back home and we’ll do the same, and we’ll come back here for Game 7.”