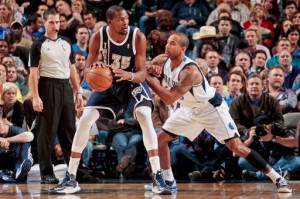 Kevin Durant was a perfect 21-for-21 from the free throw line against the Mavericks. (ASSOCIATED PRESS)

It just gave the Oklahoma City star a chance for a career high and the first 50-point game in the NBA this season.

Durant scored 52 points, including the go-ahead basket with 16.9 seconds remaining in overtime, and the Thunder turned away a big Dallas rally for a 117-114 victory that extended their winning streak to six games and ended the Mavericks’ season-best run of four straight.

A night after being voted a starter for the All-Star game, Durant had a little trouble from the field, going 13 of 31. But he was 21 of 21 from the foul line, and the Thunder made all 12 of their free throws in the fourth quarter. Watch Durant go off against the Mavericks on national TV: