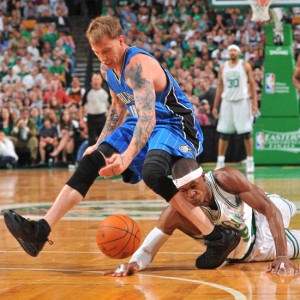 Rajon Rondo beats Jason Williams to a loose ball in the second quarter that set the tone for Game 3 of the Eastern Conference finals. (NBAE/GETTY IMAGES)

Kevin Garnett called it “the play” of the 2010 playoffs. Doc Rivers described it as an “unbelievable play.”

It occurred with under nine minutes left in the second quarter and the Boston Celtics leading the Orlando Magic 34-17. After a ball was deflected into the Orlando backcourt, Celtics point guard Rajon Rondo tracked it down by outrunning Magic point guard Jason Williams. But it wasn’t your average run-down. Rondo dove head first, reached between Williams’ legs to gain possession of the ball, got up and dribbled past Williams for a layup. It was one of those signature moments in the playoffs, and it pretty much summarized how the series is going.

“If that didn’t give your whole team energy nothing will,” Rivers said of Rondo’s amazing play that brought the crowd to a frenzy at TD Banknorth Garden and may have killed the Magic’s spirit. Boston went on to win Game 3, 94-71, to take a commanding 3-0 lead in the Eastern Conference finals.

“I just wanted it. I just wanted to make a play on the ball,” said Rondo, who has been locked in throughout these playoffs and pieced together another solid outing, scoring 11 points and delivering 12 assists. He was also responsible for Boston’s 12 steals.

“I told him after the game, when we were in the back, that it was probably the play of the playoffs for me,” Garnett said. “Pure basketball, pure hustle, pure I-want-it-more-than-you type of play. And I thought it was a foul too, but that’s just me. I’ve said this about Shorty, man, he’s in a zone. He’s just showing the world what he’s made of. The future is scary for youngin.”