Ten years ago, Vince Carter had the whole NBA world spinning like a 360 windmill.

He exploded onto the scene with a sensational rookie season in 1999 as a member of the Toronto Raptors and then became known as “Half Man, Half Amazing” (thanks Shaq!) with his mind-blowing performance in the slam dunk contest at the 2000 NBA All-Star Weekend in Oakland. Many consider Carter’s first four dunks as the best collection of dunks in NBA history – better than Air Jordan, better than The Human Highlight Film, and better Dr. J.

But then, like most shooting stars who experience a meteoric rise above the competition, Carter fizzled and took a backseat to there new “it” guys such as LeBron James and Dwyane Wade. Injuries also took away some of Carter’s immense athletic ability, and the moniker “Half Man, Half Amazing” became “Half Man, Half A Season” (thanks Kenny Smith!).

The regular highlight dunks on SportsCenter had been replaced by close-up shots of Vince Carter wincing in pain – hence the new nickname “Wince” Carter. 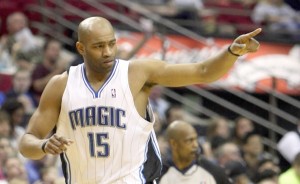 Vince Carter, 33, is pointing to a possible NBA championship this season. (ORLANDO SENTINEL)

After six seasons in Toronto, Carter was traded to the New Jersey Nets. He spent the next five seasons with the Nets, experiencing a few bright moments but nothing like the spotlight he enjoyed in Toronto. Last summer, Carter was traded to his nearby hometown team of Orlando. Happy to be back in the Sunshine State, the Dayton Beach native and Mainland High School standout has been a good fit for the Magic and seamlessly adapted to the role of secondary option to Dwight Howard, Orlando’s young first-team All-NBA center.

Carter was once considered a franchise player, like Howard, during the prime years of his career, but those days were left behind in Toronto and New Jersey. Now 33 years old, Carter knows Orlando could be the last stop of his storied career and he’s not about to waste a great opportunity to rewrite his legacy.

“For me, I’m just gonna continue to play, be the player that I am and focus on the task at hand. And when it is all said and done, maybe it’s good enough for some people, maybe it’s not,” said the eight-time NBA All-Star. “This is my opportunity for a championship. I’ve dedicated myself to this team for that reason. Like I said, when it is all said and done, I’m gonna hold my head up high. I’ve felt like I’ve had a great career.

“A lot of people don’t get the opportunity to play 11 years or 12 years. I’ve done that, and hopefully I have a couple of more left. I’m hoping I could say, ‘Yeah. I have a championship as well.’ At the end of the day, I’ll let you guys make the decision.”

On a Magic team armed with three other legitimate All-Stars (Howard, Jameer Nelson and Rashard Lewis), Carter doesn’t need to be great all the time. He just needs to play his role and wait for his turn to score.

“Guys are just focused. Everybody is locked in on what needs to be done,” said Carter, a career 22.9 scorer but averaged just 16.6 during the regular season. “We’re all playing for each other. We don’t wanna let the next man down. It’s been great to see and guys are just playing hard.”