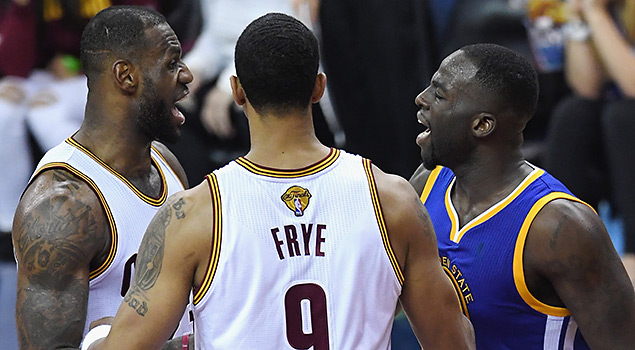 LeBron James and Draymond Green get into an altercation during the second half of Game 4 of the NBA Finals. (GETTY IMAGES)

President George W. Bush famously said, “Fool me once, shame on you. Fool me, can’t get fooled again.”

When Golden State Warriors forward Draymond Green “accidentally” kicked Oklahoma City Thunder Steven Adams in the groin during Game 3 of the Western Conference finals, most of us gave Draymond a pass. So did the NBA.

Green claimed he didn’t mean to drop a front kick to Adam’s crotch. He said he was trying to draw a foul, and as he flailed to sell the call he hit Adams.

The league upgraded Green’s foul from a flagrant 1 to a flagrant foul 2, with a $25,000 fine attached, but no suspension.

Fine. Dirty deed was brushed aside to allow the Warriors to advance to the NBA Finals.

Fast forward to Game 4 of the The Finals in Cleveland. Green finds himself in the middle of another groin-related controversy. Green, while setting a moving screen for Stephen Curry, got tangled up with LeBron James near halfcourt. It sparked an altercation that led to Draymond going Kung Fu Panda on Bron, as he threw a right hammer fist to the Cavs star’s private parts.

LeBron obviously didn’t like the fact that Draymond went down that road. The two exchanged words and things got a little physical from there.

Green later claimed he felt disrespected after LeBron tried to step over him during their dustup near the end of the third quarter. “I don’t disrespect you on the court. Don’t disrespect me. There’s no love lost. It is what it is. It’s a battle out there. I’m going to battle with whoever it is,” Green wrote in his playoff diary.

Funny how Green is calling out LeBron for disrespecting him. This is coming from a guy who admits he purposely pokes, prods and agitates opponents to get them off their game. He does primal screams just about as often as Tarzan. And he flexes both his arms almost every time he makes a good play. Disrespect? Draymond should know. It’s OK for him to do it, but when someone does it to him he feels wronged.

The league wasn’t fooled by Draymond’s latest actions. It slapped the Dubs’ defensive stalwart a flagrant 1 foul, which means a one-game suspension because it was his fourth flagrant foul point of the postseason. Had the league upgraded the foul to a flagrant 2 then Draymond would have missed two games.

Green is the classic basketball bully. When he’s getting his butt kicked and outplayed — like what Adams was doing to him during the entire Golden State-OKC series — he resorts to kicking or punching a guy while he has his back turned.

Whether LeBron stepped over Green intentionally or not, it doesn’t and shouldn’t give Draymond the green light to punch him in the groin. That is beneath someone like Green. He made the All-NBA second team and got the second-most votes for Defensive Player of the Year. A true NBA star does not punch people in the groin. You leave that up to the role players.

If Draymond wants to be treated like a basketball superstar then he should start acting like one.