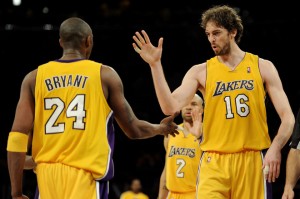 Kobe Bryant and Pau Gasol have reached the NBA Finals three consecutive years. Can they make it a fourth this season? (GETTY IMAGES)

Since the L.A. Lakers acquired – or stole, depending on how you interpret the historic heist – Pau Gasol from the Memphis Grizzlies in 2008, the Lakers have been to the NBA Finals three consecutive years. They lost to the Celtics in 2008, defeated the Magic in 2009 and outlasted the Celtics in seven brutal games in 2010.

As the 2011 NBA playoffs is about to begin, the Lakers are once again heavy favorites to reach the NBA Finals. This will be their fourth consecutive trip into June, which is unchartered territory. Not since the Showtime Lakers (1982-85) has an NBA team logged so much playoff mileage. It’s equivalent to almost two full regular seasons. So, the biggest question facing the Lakers in the 2011 playoffs is this: Do they have enough left in the tank to advance past the Western Conference and reach a fourth straight NBA Finals? The answer lies in the legs of Andrew Bynum. If Bynum stays healthy, the Lakers should be back in the Finals. If not, and Bynum has shown to be vulnerable to knee injuries (he hyperextended his right knee recently against the Spurs) then the West is wide open.

(1) San Antonio Spurs vs. (8) Memphis Grizzlies
The Spurs shot out like a cannon and ran away with the best record in the West, but they didn’t exactly finish the race strong. Gregg Popovich carefully managed the minutes of Tim Duncan, Manu Ginobili and Tony Parker to save their legs for the playoffs. Now that the playoffs are here, it will be interesting to see if San Antonio reverts back to its methodical approach or maintains its uptempo, 3-point attack. Ginobili injured his right arm in the regular-season finale, and if this latest injury turns out to be serious the Spurs’ title hopes could be dashed. The Spurs split their season series with Memphis so the Grizzlies will be a tough out. Prediction: Spurs in 6.

(4) Oklahoma City Thunder vs. (5) Denver Nuggets
Nuggets coach George Karl publicly wanted a matchup with the Mavericks because he thinks his speedy squad will be negated by the extremely fast and athletic Thunder, who now has a defensive anchor in Kendrick Perkins. This series will be a track meet, with speedsters Ty Lawson and Raymond Felton in one lane, and Russell Westbrook and Eric Maynor in another. Prediction: Thunder in 5.

(3) Dallas Mavericks vs. (6) Portland Trail Blazers
This will be the best first-round matchup. The Blazers, bolstered by the addition of Gerald Wallace, will give the Mavs all they handle and then some. LaMarcus Aldridge will probably draw Tyson Chandler because Dirk Nowitzki won’t be able to guard Aldridge in the post. The key to the series will be guard play, and the Blazers have an advantage over the smaller guards of Dallas. And if Portland can get 20 quality minutes per game from Brandon Roy then the Mavs are in deep trouble. Prediction: Blazers in 6.

(2) Los Angeles Lakers vs. (7) New Orleans Hornets
The Lakers swept the Hornets during the regular season and they should sweep the Hornets again in the postseason. The Hornets simply do not have enough size to compete with L.A.’s formidable frontline, and Chris Paul needs to play out of his mind just to eek out a game against the defending NBA champs. Prediction: Lakers in 4.

(1) San Antonio Spurs vs. (4) Oklahoma City Thunder
A classic battle of The Old & the Beautiful” against “The Young & the Very Restless.” The Spurs swept the Thunder during the regular season, but their last contest was in February and the Thunder have since retooled their starting lineup and now have Perkins to protect the basket, grab rebounds and set hard screens. Perk also brings a nasty streak to the mix, something the Thunder sorely needs. Originally, I had the Spurs winning this series in seven hard-fought games. But Ginobili’s sprained right arm could be troublesome for Gregg Popovich and Co., and without a healthy Manu the Spurs become extremely ordinary. The Thunder pushed the Lakers to limit last year, and this year they push the Spurs out of the playoffs. Prediction: Thunder in 6.

(2) Los Angeles Lakers vs. (6) Portland Trail Blazers
The Lakers-Blazers rivalry reached a fever pitch in 2000 and 2001 when the Blazers, led by Scottie Pippen, Rasheed Wallace and Brian Grant, gave the Lakers all they can handle but just couldn’t get over the hump. It’ll be the same story this season as the Blazers will make this a very competitive series with their depth and defense, and may even push this thing to the limit. But in the end, the Blazers’ perimeter players will have no answer for Kobe and their frontcourt won’t  be able to keep up with the Hollywood Hills (Gasol and Bynum). Too bad Roy is a shell of himself these days because the Blazers really need the old Brandon Roy to knock off the champs. Prediction: Lakers in 7.

(2) Los Angeles Lakers vs. (4) Oklahoma City Thunder
This series features two teams from polar opposites of the basketball spectrum. In one corner you have the two-time defending NBA champs with a history full of superlatives. The Lakers are led by one of the all-time greats in Kobe Bryant and L.A.’s three-headed frontcourt of Gasol, Bynum and Lamar Odom is unrivaled in the league. In the other corner you have a franchise that originated in Seattle, but is still very much in its infancy stages. OKC is led by a couple of 22-year-olds: Kevin Durant and Russell Westbrook. It’s Youth vs. Experience. Power vs. Speed. The Rebel Alliance vs. the Evil Empire. Durant, the young Jedi knight, vs. Kobe, the Jedi master. If the Lakers-Thunder sequel is anything like last year’s epic struggle, basketball fans are in for a treat. Despite getting significantly bigger with the acquisition of Perkins, the “Fast & Furious” Thunder still can’t measure up to “The Big Lake Show.” Prediction: Lakers in 7.