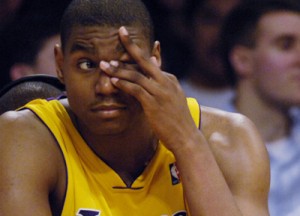 Lately, I cannot tell the difference between Andrew Bynum and DJ Mbenga, which is not good for the Los Angeles Lakers.

For a guy who was supposed to be the last piece to the Lakers’ championship puzzle, Bynum has turned into Mr. Irrelevant in this year’s playoffs. He has morphed into Andrew Mbenga.

Bynum, a 7-footer with a boatload of talent but a history of serious knee injuries, has been in and out of the starting lineup, and his body language is comparable to a 6-year-old who had just been denied an extra 10 minutes of playtime and told not to play on the grass area.

During the Utah series, Lakers Coach Phil Jackson basically sent a loud and clear message to his 21-year-old pupil that the group is moving on with or without him, benching the big man and re-inserting Lamar Odom in the starting lineup.

His teammates, namely Kobe Bryant and Pau Gasol, know how important Bynum is to the Lakers and have tried their best to throw words of encouragement to keep him from totally falling into an abyss. He had his moments in the Houston series, including a 14-point, six-rebound performance in Game 7. But for whatever reason, he just could not stay on the court – whether it’s his own doing or Jackson’s lack of patience.

His malaise has extended through the Western Conference finals. In two games against the Denver Nuggets, he is averaging 7.5 points and 4.0 rebounds in 33 minutes, and is 6-of-12 from the field. In Game 2, when Bynum jogged back on defense and allowed an uncontested shot, Jackson was so perplexed he called timeout and eventually pulled Bynum and sat him on the bench for much of the game.

Jackson wants Bynum to be a clean-up guy, meaning he needs to rebound and contest shots. In 14 playoff games, he has 53 rebounds and 13 blocked shots. Those are decent numbers if your name is D.J. Mbenga. But we’re talking about Andrew Bynum. The Lakers have invested a lot of money in Bynum, who signed a $58 contract extension for four years last October and will count $14 million on the team’s salary cap next season. Whether it’s the MCL tear or lack of confidence, Bynum is not earning his paycheck.

Until he asserts himself in this year’s playoffs and becomes a bigger factor on offense and defense, Laker fans should start calling him Andrew Mbenga.