Kobe Bryant has only been on Twitter since Jan. 4 but he already seems to have picked up how this social media thing works. After a New York Daily News report came out saying Bryant and Dwight Howard had a heated exchange after Jan. 1 loss to Philadelphia, Bryant helped diffuse the rumored rift between him and Howard by posting a funny photo on Twitter.

The photo shows Bryant and Howard playfully putting their hands up as if they’re about to go toe-to-toe in the training room and head coach Mike D’Antoni right in the middle of it. Here’s the photo courtesy of @kobebryant: 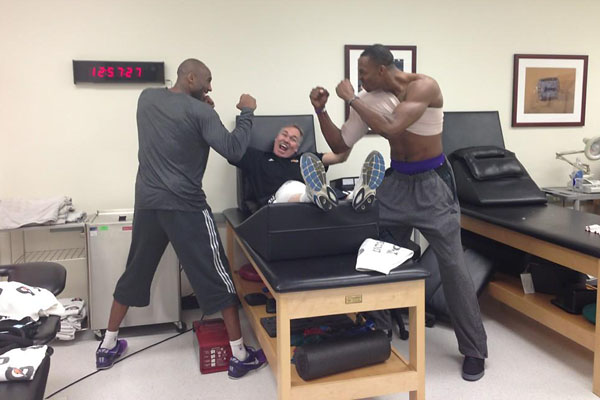 Daily News writer Stefan Bondy wrote on Jan. 7 that Bryant and Howard are not getting along, and that Howard is sending hints that he may leave L.A. after one season. Bondy wrote:

A league source told the Daily News that the Lakers stars got into a heated exchange following a New Year’s Day loss to the 76ers, and Bryant went for a low blow – referencing and agreeing with Shaquille O’Neal’s criticisms of Howard being soft.

Howard was restrained from going at his teammate, according to the source, and there have been rumblings from the center’s camp that he’s been unhappy with Bryant since earlier in the season.

Three days after the altercation, following a disheartening loss to the Clippers, Howard complained about the lack of chemistry on the Lakers. It was a comment seemingly directed at Bryant, who is averaging a league-high 22 shots despite playing with three potential Hall of Famers.

Whether the “heated exchange” occurred or not, this is nothing new in NBA circles. Every locker room has had at one point or another a blow-up. There is obviously a chemistry issue with the Lakers, and it will take sometime before they can sort out their differences on and off the court. Howard is not a combative guy by native, but he tends to pout way too much and is having trouble finding his way around an offense that seems to revolve around Kobe. Before anything else, Howard needs to heal up from his back and shoulder injuries. His physical limitations are keeping him from playing at an All-Star level.
As for Kobe? Well, it’s the same old story for No. 24. He needs to stop hijacking the offense and share the wealth. If Kobe starts playing team ball then everyone will be happy.