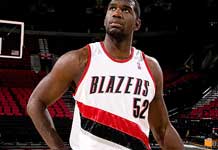 Portland has waited a year to see Greg Oden on the court.

They do have two things in common: Bynum and Oden both command great attention and both can be classified as game-changers.

Bynum is a 7-footer with a wingspan of a condor. He has worked his way up to 285 pounds three years after the Lakers took a chance on this skinny high school kid from New Jersey.  He has shown flashes of brilliance, teasing the Lakers with numbers only reserved for all-star centers. At one point during last season, Bynum was averaging 13 points, 10 rebounds, 3 blocks and a Shaq-like 60 % shooting from the field. He was headed for a breakthrough season until his kneecap popped out of place. The Lakers are monitoring his rehab before signing him to the maximum contract of $80 million. Against Utah on Oct. 7, Bynum looked sharp on offense and seemed healthy.

Oden is a 7-footer who was already 285 pounds when he left Ohio State after one season. He was selected No. 1 overall by the Portland Trail Blazers in the 2007 NBA draft but missed all of last season because of a knee injury that required microfracture surgery. It is the same injury that forced Amare Stoudemire to miss a year and a half for the Phoenix Suns. However, based on what we saw in Oden’s debut on Oct. 7 at the Rose Garden (or the Garden of Oden) the big man looks strong, adding 10-15 pounds to his large frame, and ready to make an impact for the Blazers. Oden appeared determined on offense and stout on defense. His presence alone could be enough to lead the Blazers into the Western Conference playoffs.

So, if you became NBA general manager and won the lottery, which center would you take: Bynum or Oden?