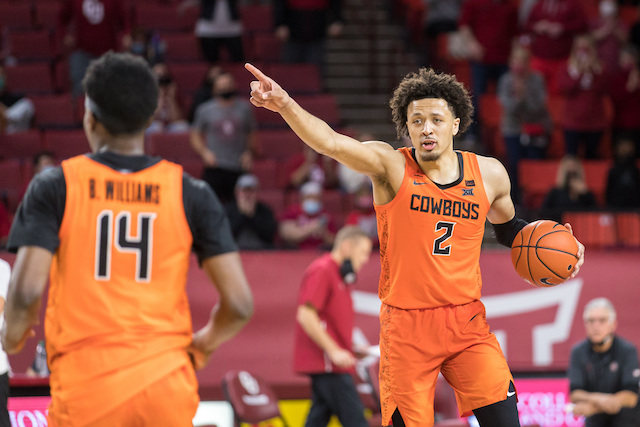 Detroit Pistons general manager Troy Weaver and the rest of the Pistons’ basketball decision-makers hold the top card in the 2021 NBA draft. The Pistons have an opportunity to change the fortunes of a franchise that’s been to the playoffs twice in 12 years and haven’t had a playoff win in 14 years.

Detroit fans are starving for a winner and they could finally hang their Motor City Bad Boys hat on their first homegrown star since Isiah Thomas. The Pistons roster is starting to take shape after drafting two All-Rookie players in Saddiq Bey and Isaiah Stewart, and forward Jerami Grant — the team’s big offseason signing in 2020 — appears to be a foundational piece after enjoying a breakout season. Grant averaged 22.3 points per game (he averaged 12 in his last season in Denver), easily the highest scoring average of his seven-year NBA career. Grant was rewarded with a spot on Team USA in the Tokyo Olympics.

Another young player the Pistons are high on is point guard Killian Hayes. The seventh overall pick in the 2020 draft had an injury riddled rookie season and appeared in just 26 games. With Grant, Bey, Stewart and Hayes in the fold, the Pistons could be one draft pick away from becoming relevant again.

The 2021 NBA draft is loaded with elite talent at the top, good depth in the middle, and some potentially solid late-rounders. There is no clear-cut No. 1 pick this year but there are plenty of worthy contenders to be selected at the top of the draft.

OneManFastBreak ranks the 10 best prospects in the 2021 NBA draft.

1-Cade Cunningham, guard-forward, Oklahoma State
NBA comparison: Grant Hill
Scouting report: Cade Cunningham has the total package (18.2 points, 6.1 rebounds, 3.6 assists), and flashed all his wonderful physical tools in his lone season at Oklahoma State. He has great size and strength (6-8, 220), and capable of playing four positions. His game is still evolving and he has yet to hit his ceiling. Cunningham has a knack for coming through in the clutch. He scored 10 of his season-high 40 points in overtime to lead Oklahoma State over rival Oklahoma 94-90 on Feb. 27. Cunningham’s previous high was 29 points. In his first and only Bedlam rivalry game, Cade made 12 of 21 field goals and 13 of 14 free throws. He also finished with 11 rebounds three steals and two blocks. Cunningham would be a good fit on any lottery team. ESPN analyst Fran Fraschilla compared Cunningham to Dallas Mavericks superstar Luka Doncic. “He’s not going to jump over tall buildings. He’s not super explosive, but his size and strength and basketball acumen — [that’s] where he’s very similar to Luka,” Fraschilla told the Dallas Morning News.

2-Evan Mobley, forward-center, USC
NBA comparison: Jermaine O’Neal
Scouting report: Armed with a 7-foot-5 wingspan, Evan Mobley is the best shot blocker (averaging 3 blocks per game) in this draft class. He led all Pac-12 freshmen in scoring (16.3) and was among the leaders in rebounds (9.0). His defense is slightly ahead of his offense, but NBA scouts love his immense potential. He plays a bit like former Indiana Pacers big man Jermaine O’Neal, as both are natural pick-and-pop players. Mobley, who is a legit 7-footer, also compares well with last year’s lottery pick James Wiseman, except Mobley is much more polished on the defensive end. Mobley could easily go No. 1 in the draft, but there are a few knocks on him. First, he lacks aggression. He tends to float during games and doesn’t impose his will. Second, he must put on more weight because at 210 pounds he’ll get moved around in the paint.

3-Jalen Suggs, guard, Gonzaga
NBA comparison: Jason Kidd
Scouting report: Gonzaga coach Mark Few said Jalen Suggs has a magical aura about him. Suggs is a natural-born leader whose value goes beyond statistics. His football background is a huge plus. The former Minnesota high school football star plays point guard like a quarterback. He led the Gonzaga Bulldogs to a 31-1 season, coming within one game of completing a perfect season. His 3-point buzzer-bearing in the Final Four against UCLA will go down as one of the greatest shots in NCAA tournament history. He has great anticipation when he delivers passes. He doesn’t shy away from contact when he drives to the basket, as he uses his 6-4, 205-pound frame extremely well. His outside shot is still a work in progress (36% from 3-point), but his technique is sound. He is a terrific on-ball defender, often guarding the other team’s best perimeter player. His high-end NBA comparison is Jason Kidd. If he’s anything close to Kidd, he’ll have a long NBA career.

4-Jalen Green, shooting guard, G League Ignite
NBA comparison: Zach LaVine
Scouting report: Swingman Jalen Green has a boatload of talent who could turn out to be the best scorer in this year’s draft class. He was a prolific scorer in high school (31.5 points per game at San Joaquin HS in Fresno, Calif.) and he flashed that scoring ability (17.9 points) in 15 games for G League Ignite. When Yahoo Sports asked Green if he thought he was the best player in this draft class and he said, “Of course. You always have to put money on yourself. I do think I’m No. 1, but that’s just saying I know I have to keep working.” You have to love Jalen’s confidence.  Green has the ideal size (6-6, 186) to play shooting guard in the NBA. He is a three-level scorer with springs in his legs.  Shot selection is a little concern, but that can be easily fixed. Green got better the more games he played in the G League bubble, which shows he’s got a high ceiling. 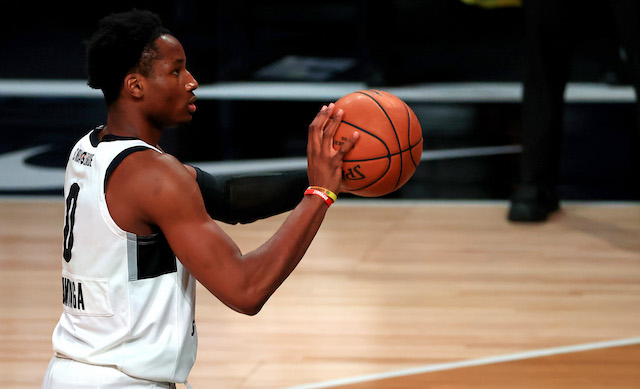 5-Jonathan Kuminga, forward, G League Ignite
NBA comparison: Pascal Siakam
Scouting report: Kuminga, 18, is one of the youngest players in the draft after reclassifying in high school. He got off to a hot start in the G League bubble, but tailed off a bit. He ended up averaging 15.8 points and shooting just 38 percent from the field in 13 games for Ignite. He did average 7.2 rebounds and showed some toughness in the paint. He can play either forward spot (small or power forward) but might be better suited as an undersized 4. The 6-7, 210-pounder is a native of the Democratic Republic of Congo. He moved to the U.S. in 2016, so he’s still adjusting to a new culture on and off the court. “He was our most physical guy. He was our best two-way player in terms of being able to guard on the defensive end one through four,” said former NBA player Brian Shaw, who coached Kuminga in the G League bubble.

6-Davion Mitchell, guard, Baylor
NBA comparison: Mookie Blaylock
Scouting report: Davion Mitchell is built like an NFL safety or running back (6-2, 205). He was the engine that powered the Baylor Bears to a national championship in 2021. “We call him Off-Night because people tend to have off nights against him,” Baylor coach Scott Drew said of his junior point guard, who was the Big 12 defensive player of the year. Mitchell plays suffocating defense, blessed with speed, strength, tenacity to shadow an opposing player 94 feet. Because of his last name and wears No. 45, there’s plenty of comparisons to Utah Jazz guard Donovan Mitchell. But Davion’s game is much more comparable to former Atlanta Hawks defensive dynamo Mookie Blaylock, who was one of the best on-ball defenders in the ’90s.

7-Chris Duarte, guard, Oregon
NBA comparison: Dillon Brooks
Scouting report: Chris Duarte is another “veteran” player in the draft. The 24-year-old from the Dominican Republic may not have the highest of ceilings, but what he brings to the table is an NBA-ready skill set. He’s a plug-and-play wing player who should contribute right away. He can shoot the ball with range, he’s a capable wing defender, and has very good size for his position (6-6). He’s more of a smooth athlete than an explosive athlete. There’s a maturity about his game, with a blend of toughness and high basketball IQ. Duarte was the winner of the Jerry West Award as college basketball’s top shooting guard. He was a first-team All-Pac 12 selection and was named to the conference’s all-defensive team. He’s exactly what most winning teams covet: a two-way player. If you like Memphis Grizzlies guard Dillon Brooks (also an Oregon product), then you’ll like Chris Duarte.

8-Scottie Barnes, guard-forward, Florida State
NBA comparison: Nicolas Batum
Scouting report: Scottie Barnes is an intriguing prospect who is moving up on many draft boards. The 6-8 versatile forward can play multiple positions and could potentially be an outstanding defender. Scouts love his 7-foot-2 wingspan, along with his footwork and speed to stay in front of perimeter players. Barnes can split time as a 3 or 4, depending on certain matchups. The downside of Barnes is on the offensive end. He averaged just 10.3 points per game and shot poorly from 3-point range (27% percent) in his lone season under Leonard Hamilton at Florida State. But according to Bleacher Report, there is a belief Barnes has “star potential, even if it’s the unconventional type.”

9-Josh Giddey, guard, Adelaide 36ers (Australia)
NBA comparison: Ricky Rubio
Scouting report: Josh Giddey is a highly touted Australian basketball prospect who possesses great vision and creativity, especially as a pick-and-roll ballhandler. He understands how to exploit angles, drop pocket passes and create easy looks for his big man. He is a bigger version of Spanish star Ricky Rubio, with a better outside shot. A large contingent of NBA executives traveled to Las Vegas to watch the 6-8 point guard with the Australian national team. Giddey is advanced for a teenager (doesn’t turn 19 until October), has good size and good feel for the game. He is also an improving shooter, and his form doesn’t appear to be the reason for his 29 percent shooting from 3-ball. If teams are willing to roll the dice on the Aussie, it could pay off in the long run.

10-Corey Kispert, guard-forward, Gonzaga
NBA comparison: Joe Harris
Scouting report: At age 22, Kispert is one of the older players in the draft but that shouldn’t prevent teams from taking a hard look at the Gonzaga sniper. The 6-foot-7 swingman averaged 19.9 points per game for the Zags and was the most consistent shooter in college basketball, making three or more 3-pointers in 11 games this season with a season-high 6 threes against Pepperdine. Kispert shot 44 percent from behind the 3-point line and nearly 88 percent from the free throw line. In the era of smallball and schemes influenced by analytics, Kispert brings an extremely valuable NBA skill set. And most NBA teams will look past at Kispert’s shortcomings and focus on his strengths. The obvious NBA comparisons are Joe Harris and Kyle Korver. Teams needing a shooter — and you can’t have enough shooters on a roster — will immediately fill a need by taking Kispert.