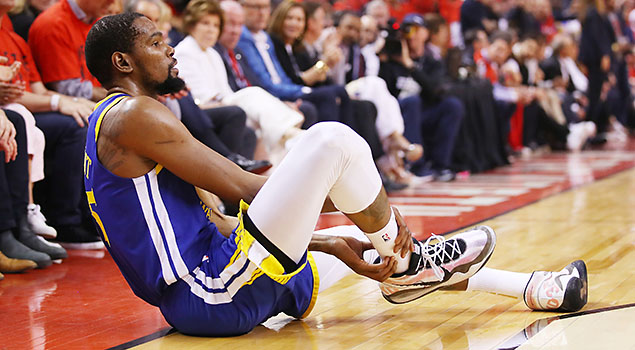 Bob Myers was in tears when he delivered the grim news about Kevin Durant.

The Golden State Warriors president of basketball operations confirmed that Durant sustained an Achilles tendon injury in the first half of Game 5 of the 2019 NBA Finals and most likely won’t be able to play basketball for the next nine months. Durant’s early exit put a dark cloud on what turned out to be an amazing finish, as the Warriors rallied behind Steph Curry and Klay Thompson to pull out a gut-wrenching 106-105 victory to stave off elimination. But the Warriors win felt like a loss.

Durant’s injury affected everyone in the building, including the Toronto players. “Some of the guys on our bench were really shook up,” said Raptors coach Nick Nurse. “Some of [our] guys said he tore something.”

Myers said Durant was cleared by the team’s medical staff to play Game 5, saying it was a collaborative decision and they felt good about the decision. He said he didn’t think there was anybody to blame, but later said if you have to blame anyone the finger should be pointed at him.

“I don’t believe there’s anybody to blame, but I understand this world,” Myers said. “If you have to, you can blame me. I run our basketball operations department.”

Myers should take most of the heat for the decision to play Durant, along with the Warriors medical team and head coach Steve Kerr, who said 90 minutes before game time there were no minutes restrictions for Durant. For about 12 minutes, KD looked real good. He drained his first three shots from behind the 3-point arc and even got into a little trash talk with Toronto guard Fred VanVleet.

It all came to an abrupt end early in the second quarter when KD tried to make a simple move against Serge Ibaka on the right wing and pulled up lame. He immediately grabbed the back of his right leg where the Achilles is located. Everyone who has suffered an Achilles tear knows that look. Durant’s season is over and his future now in jeopardy as he heads into free agency.

Myers, feeling the need to defend his medical staff, emphasized that the experts who have been monitoring Durant for the past month are “good people.” But no matter how Myers can put a spin on this decision, it was the wrong one. Myers and the entire Warriors organization failed Durant.

“The people that questioned whether he wanted to get back to this team were wrong,” Myers said. “He’s one of the most misunderstood people. He’s a good teammate, he’s a good person. It’s not fair. … I’m lucky to know him.”

Myers’ affection for Durant appears genuine. No one is doubting that he deeply cares for his players. But fact of the matter is KD should not have been cleared to play. The injury was far worse than what the Warriors were letting on. He should have sat out the entire Finals. And Durant’s not the only one who should be sitting out. Klay Thompson is also risking major injury by playing through his hamstring injury, and Kevon Looney can barely get up and down the court without wincing in pain. He shouldn’t be playing either.

Durant put his health on the line, and no one should ever question his heart and how much he cares about winning. But sometimes you have to save players from themselves, and the Warriors organization failed him miserably. Someone should have stepped in and stopped KD from himself.

Live to fight another day. That should have been the approach.

Durant faces a long road to recovery. Depending on when he’ll opt for surgery, the whole healing process could take up to nine points (eight if he pushes his rehab). That means he could potentially miss almost the entire 2019-20 season. The timing couldn’t have been worse because Durant becomes a free agent this offseason. He is looking for a huge payday and this setback could dramatically affect his next contract. Will teams still offer him the max? We shall see.

A dejected Durant took to social media to show support for his teammates after their victory in Game 5. “I’m hurting deep in the soul right now I can’t lie,” Durant wrote. “But seeing my brother get this win was like taking a shot of tequila, I got new life. #dubs”