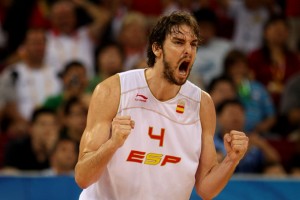 Pau Gasol is the emotional leader of the Spanish national team. (FIBA EUROBASKET)

Pau Gasol took the brunt of the criticism during the 2011 NBA playoffs when the Lakers were swept out of the second round by eventual champion Dallas.

Gasol didn’t play his best during the series, and at one point he appeared so out of it that Lakers coach Phil Jackson was seen chastising his star forward basically telling the Spaniard to snap out of his funk.

Rumors swirled all over the Internet that Gasol was having issues with his girlfriend Silvia Lopez Castro, then it was compounded when teammate Shannon Brown tweeted that he was not having an affair with Pau’s girl (memo to
Shannon Brown: if nothing was going on then why tweet about it?) 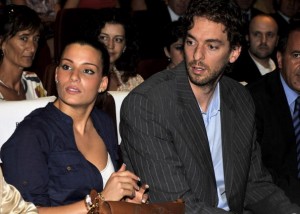 Gasol is one of the nicest NBA players you will ever meet, and something was clearly bothering him last season. More often than not, Pau wears his emotions on his sleeve and he needs to be highly engaged in order to be effective. So, it is important for Pau to regain his confidence and it starts with European Championships in Lithuanian.

Laker fans are hoping that playing for his country and being with familiar faces should help Gasol’s mental state. Sorta like going back home to your mom’s house for some good old-fashioned home cooking to clear your mind. As a bonus, Pau gets to play with his brother, Marc.

So far, the Gasols are rolling through the competition at the European Championships. With the Gasols in the post and international stars Juan Carlos Navarro and Ricky Rubio in the perimeter, Spain may have the most complete team at EuroBasket 2011.

In Spain’s 77-68 victory over Germany in the second round, the Gasol brothers combined for 43 points (Marc had 24 and Pau had 19) to down Dirk Nowitzki’s squad. Spain’s lone loss in the tournament came against Turkey, which is led by Hedo Turkoglu and Omer Asik.

As long as the Gasol brothers are firing on all cylinders, Spain should capture the gold medal at EuroBasket 2011 (although France and host nation Lithuanian are capable of derailing that plan). The top two teams in the tournament earn automatic berths to the 2012 London Olympics.