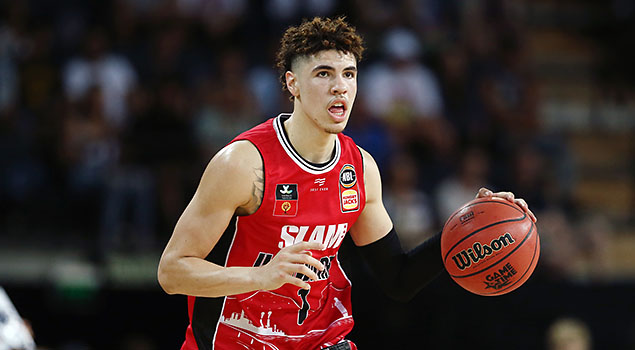 If you’re an NBA scout or executive, don’t judge LaMelo because of what you’ve read or heard about him. Don’t let your disdain for his outspoken father, LaVar Ball, influence your decision.  Don’t listen to the noise from pundits on TV or internet trolls. Watch him play and ask yourself this question, “Is LaMelo Ball the best prospect in the 2020 NBA draft?” The answer is a resounding “yes.”

The young man is a star in the making. He has more followers on Instagram than Zion Williamson. He brings a boatload of buzz to any arena that he plays in (if the coronavirus pandemic allows fans back in arenas). And based on his experiences on his family’s reality TV show “Ball in the Family” on Facebook Watch, he’s extremely comfortable being in the spotlight.

LaMelo is a 6-foot-7, 181-pound combo guard armed with unlimited shooting range and a handle that’ll make any Harlem Globetrotter salivate. Speaking of globetrotting, LaMelo — who turned 19 in August — is well traveled. His basketball odyssey has been anything but ordinary.

After just two seasons in high school, LaVar pulled him out of Chino Hills and placed him in a professional league in Lithuania. He took another detour and played in his father’s Junior Basketball Association (JBA). After contemplating another trip overseas, he decided to stay in the States and enrolled at SPIRE Institute in Ohio where he played for Jermaine Jackson, who later became his manager. LaMelo’s last pre-NBA stop was New Zealand where he played 12 games for the Illawarra Hawks, averaging 17 points, seven rebounds and seven assists.

LaMelo’s upbringing on the basketball court is unlike any before him, making it near impossible to compare him to even his own brother, former L.A. Lakers No. 2 overall pick and current starting New Orleans Pelicans point guard Lonzo Ball. But LaVar is convinced his youngest son is the best of all the Ball boys.

“Definitely Melo’s better than Lonzo at this age, on the fact that the people that Melo [was] playing against at 16 were not the same people Lonzo was playing at 16, 17,” LaVar said during an interview with Fox Sports Australia.

“I took Melo out of high school, so he’s not studying chemistry tests and social studies and all that,” LaVar said. “You’re practicing 24/7. All you’re doing is working on basketball… so you’re not playing regular high school guys, where Gelo and Zo played the high school route. That’s why Melo is so much better, because he’s got so much more experience, because I learned. This is a better road right here, if we do this. That’s why he’s prepared to come over here and be successful playing against grown men, because he already did that.”

OneManFastBreak.net breaks down the eight best players eligible for the 2020 NBA draft.

1-LaMelo Ball, G, Illawarra Hawks (New Zealand)
NBA comparison: Lonzo Ball
Scouting report: LaMelo Ball’s size allows him to play both guard positions, but he’s most comfortable at point where he can control the game. Does he shoot too much? Yes. Does he take bad shots? Yes. But with the proper coaching and right system, you can reel him in. He’s a much better shooter than big brother Lonzo and far superior athlete than other big bro LiAngelo. Melo is a gifted scorer who can score on all three levels. He can shoot the 3-ball, pull up at midrange and can finish at the rim with either hand. His creativity with the ball is comparable to Lonzo, but Lonzo has the huge edge over Melo on defense. Melo tends to drift and lose focus defensively. He’s so anxious to get the ball back on offense, he takes too many chances and gambles way too often. But at 6-7 and the potential to fill out to close to 200 pounds as his body matures, Melo’s defensive deficiencies can be fixed.

2-Obi Toppin, F, Dayton
NBA comparison: Amar’e Stoudemire
Scouting report: Obi One is a late bloomer. It took a couple of years for the basketball community to take notice, but he’s got everyone’s attention now. He dominated at the mid-major level, leading Dayton to a 29-2 record and 18-0 in conference. If the COVID-19 pandemic didn’t cancel the NCAA tournament, Toppin and Dayton would have been a Final Four favorite. The 6-9 forward was the consensus national player of the year in college basketball, winning the Naismith and Wooden awards. He’s fundamentally sound, understands spacing and operates well in pick-and-roll and pick-and-pop situations. Toppin is a smooth, versatile athlete who can play out in the wing or play a traditional power forward. He is compared to former Phoenix Suns star Amar’e Stoudemire for the way he dunks. If there’s one knock on him is that he’s 22 and may have already hit his ceiling. But who needs a ceiling if you can dunk like Obi One.

3-James Wiseman, F-C, Memphis
NBA comparison: Chris Bosh
Scouting report: James Wiseman is a tough one to evaluate since he only played three games at Memphis before shutting it down following an ugly eligibility battle with the NCAA. Wiseman, 19, has immense potential and has all the physical tools to be a dominant center. He has a great frame with long arms and excellent agility. He runs the floor well and is a high-level athlete for a 7-footer. What worries some teams is his lack of aggression. He can get pushed around, which is bad news if he’s going to play center full time. He’ll need to fill out more (listed at 235 pounds) and develop some upper body and lower body strength. He also relies a little too much on his left hand, but that appears to be the case for most lefties (look up James Harden, Lamar Odom, Manu Ginobili). Wiseman may have some black marks on his basketball resume, but the talent is undeniable. He can potentially be a 20-and-10 guy at the pro level and fit in any system.

4-Anthony Edwards, G, Georgia
NBA comparison: Victor Oladipo
Scouting report: Anthony Edwards is a 6-5, 225-pound beastly shooting guard who can get buckets. He’s what most scouts would call a professional scorer. He reminds some scouts of a bigger version of Indiana Pacers guard Victor Oladipo. Interestingly enough, Edwards played college ball for coach Tom Crean, who coached Oladipo when he was at the University of Indiana. Edwards can score in a variety of ways, but he’s most effective shooting off the dribble from midrange or behind the 3-point line. The 19-year-old averaged 19 points per game for a 16-16 Bulldogs squad that finished next-to-last in the SEC. It tells you he made and took a lot of shots on a bad team. The big red flag on Edwards’ resume is that he shot only 29 percent from 3-point range in college. But Crean warns scouts that “you’re going to miss a lot” if you’re purely judging Edwards by his shooting numbers.

5-Onyeka Okongwu, F-C, USC
NBA comparison: Serge Ibaka
Scouting report: Onyeka Okongwu was LaMelo Ball’s high school teammate for two seasons at Chino Hills, and a member of two California high school state championship teams. The two-time California high school player of the year has all the physical tools to be very good pro. The 6-9, 235-pound forward-center is blessed with soft hands, which enables him to catch seemingly every lob pass you throw to him near the rim. He’s also an outstanding shot blocker who can anchor a defense. Okongwu, 19, was one of the few brights on a disappointing season for the USC Trojans. His defense is ahead of his offense at this stage of the game but his offense is quickly catching up. He was mainly a roll guy in Andy Enfield’s scheme at USC, but he’s capable of facing up or playing with his back to the basket. Having played with the Ball brothers in high school, Okongwu is very comfortable on the big stage.

6-Deni Avdija, G-F, Maccabi Tel Aviv (Israel)
NBA comparison: Detlef Schrempf
Scouting report: Deni Avdija was once one of the best kept secrets in the draft, but the cat is out of the bag now. NBA execs are well aware of his talent and potential. The 19-year-old prodigy has been playing professionally for three years in the Euroleague for Israel’s Maccabi Tel Aviv. The 6-8 wing player has an intriguing skill set. He plays an all-around game with a deadly 3-point stroke. He is comfortable handling the ball or playing off the ball. He shoots with confidence and can put the ball on the deck if you run at him. What makes him different than most European players is he’s got a little bounce to his game and can finish strong at the rim. He’s got a great feel for the game, something he picked up from his father, Zufer, who also played professionally in Europe. Avdija is poised to become only the third Israeli to play in the NBA, after Omri Casspi and Gal Mekel. If a team is willing to roll the dice, Deni could be the steal of the draft.

7-Isaiah Stewart, F-C, Washington
NBA comparison: Montrezl Harrell
Scouting report: When you see Isaiah Stewart you see an imposing player who looks like he’s been living inside a weight room. He’s a rugged player who has an NBA-ready body. He’s Dwight Howard without the hops. He’s not a fluid athlete, a bit herky-jerky at times, but he brings a lunch-pail mentality to the table. Stewart averaged 17 points, 8.8 rebounds, 2.1 blocks, and shot 59 percent in his one season at Washington. He uses his 6-9, 250-pound frame very well and doesn’t shy away from contact. He compares favorably to super sub Montrezl Harrell. Stewart isn’t a polished player on offense, but he makes up for it with energy and effort. He has a high motor and loves to compete. He arguably outplayed his competition in high-profile matchups against top 2020 prospects James Wiseman, Onyeka Okongwu and Zeke Nnaji. “I feel like I am someone who can play in an NBA game tomorrow physically,” Stewart told ESPN.

8-Cole Anthony, G, North Carolina
NBA comparison: Kyle Lowry
Scouting report: A partially torn meniscus in his right knee sidelined Cole Anthony for 11 games during his freshman season in Chapel Hill. Without him the Tar Heels struggled. When he’s healthy, the son of former NBA guard Greg Anthony is talented lead guard. He’s not your prototypical point guard, but what he can be is a primary scorer who could average 20 points per game and stretch the defense with his 3-point range. Anthony may not be freakishly tall like Melo Ball, but he’s got decent enough size (6-2) to survive the physicality at the pro level. Anthony struggled with shot selection at North Carolina, something he’ll need to work on once he gets in an NBA gym. But Cole has his dad to lean on for advice, which is huge luxury given most prospects won’t have a lot of time this offseason to impress teams because of the COVID-19 pandemic.