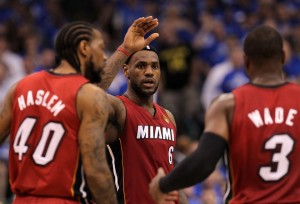 LeBron James (middle) can't hide from all the criticism for his poor play in crunch time in the 2011 NBA Finals. (GETTY IMAGES)

When a reporter called him out after Game 3 for “shrinking” in the fourth quarter and not playing like a true NBA superstar, LeBron James responded by saying he’s a two-way player and you can’t look at the stat sheet as the barometer for his overall game. Then James told the same reporter to ask a better question next time.

James made just three of 11 shots from the field and scored eight points – the first time he has been held under 10 in 90 postseason games  – and none in the all-important fourth quarter. ZERO points in the final 12 minutes of a game in the NBA Finals from the man who was supposed to claim the basketball throne vacated by Michael Jordan and rented by Kobe Bryant is absolutely unacceptable. Not exactly the way you respond after being challenged by a scribe.

Dirk Nowitzki didn’t have a good shooting night but he found a way to score 21 points, including a huge layup with 14.4 seconds left, despite being slowed by a sinus infection. What’s LeBron’s excuse? Is he afraid to fail? Is the pressure of the NBA Finals too much for him? Does he have what it takes to be a champion? These questions linger as long as LeBron keeps coming up short in the big moments.

One thing is for certain. LeBron’s decision to come to Miami and join forces with Dwyane Wade was a clear admission on LeBron’s part that he can’t lead a team to a championship. He needed someone to hold his hand and lead him through the dark.

And the way he’s been performing in the NBA Finals, forget about wearing Robin’s cape. LeBron is playing more like Alfred the Butler.

Even former NBA players are doubting him.

“I don’t mind zero points, but you have to give more of an effort and I did not like his body language,” former Heat star Steve Smith said about James who looked almost lost and disengaged in the fourth quarter of Game 4 when the Wade and the Heat needed him most, something three-time NBA champion and newly minted Houston Rockets coach Kevin McHale noticed as well. “Inexplicably, LeBron was really passive. I mean he was unbelievably passive. He’s too good to have eight points. He took 11 shots and just wasn’t aggressive,” McHale said.

In four fourth quarters in the NBA Finals against the Mavericks, LeBron has scored a total of nine points. Nine points! He’s getting outplayed by role players Mario Chalmers and Udonis Haslem late in games, and neither one is near LeBron’s caliber in terms of basketball ability. Since Game 1 when he led the Heat in scoring with 24 points, LeBron’s point total has fallen like the stock market: 20, 17, 8.

Let’s get real. If LeBron James played at Dwyane Wade’s level, this series would be over by now.

Wade scored a game-high 32 points in Game 4, but he got a little sloppy at the end with a missed free throw and dropped the ball on the Heat’s final possession because he was fatigued from having to carry LeBron for four quarters and Chris Bosh for two quarters. With an ineffective James and a very shaky Bosh (who was 1-for-7 in the second half), the Mavericks rallied in the fourth quarter and won, 86-83, tying the series at 2.

“I definitely didn’t play great offensively,” James said during his postgame news conference after Game 4. “I gotta do a better job of being more assertive offensively, and not staying out of rhythm offensively the whole game. One thing I try to concentrate is if I get two guys on me I try to get my teammates better and get them some great looks. But at the same time I gotta keep myself in rhythm while I’m doing that as well.”

When LeBron was asked how he’s going to fix his shooting stroke and bust out of his slump, he gave this excuse: “With these games every other day there’s not much gym time. If I feel like I need to come to gym to get some extra shots I will. Absolutely. I’m confident in my ability. It’s just going out there and knocking them down. When you have an opportunity to gotta knock them down. My teammates give me the confidence. They have given me the confidence all postseason, all year.”

OK, LeBron. Keep telling yourself you’re still confident in your shot. But from the looks of it, you need to find time and make the necessary adjustment to correct your stroke because Wade and Co. need more than just eight points from a guy who averages almost 27 points per game. Find a custodian (and I’m not talking about Brian Cardinal), ask for the keys to the gym and starting shooting jumpers until your arm gets numb. That’s what Jordan will do, that’s what Kobe will do, and that’s what your teammate D-Wade will do. That’s what superstars do.