Given Yao’s history of foot problems (he’s only played more than 60 games once since 2005-06) it’s not shocking that the 30-year-old, 7-foot-6 Chinese legend is calling it quits. He missed the entire 2009-10 season recovering from surgery to repair a broken bone in his foot and played just five games in 2010-11 after suffering a stress fracture in his ankle.

With Yao being the prideful man that he is, not being able to compete at the highest level is not something he would like to explore.

Yao was the No. 1 overall selection in the 2002 NBA draft and was voted to the All-Star game in each of his eight seasons in the Association. He scored 9,247 points in only 486 games. He averaged 19 points per game, and shot 52% from the field and 83% from the free throw line, a rare feat for 7-foot centers. But Yao’s contributions to the sport can’t be measured by statistics. He was a global icon who helped the NBA brand break new ground in Asia. Yao may not have won an NBA title, but he left a huge impression the NBA that will last forever. 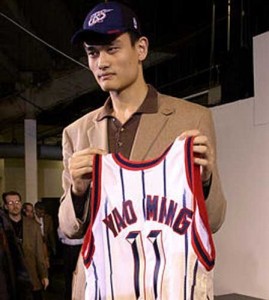 Yao became the first Chinese-born player to be selected the top pick in the NBA draft, an honor that was both a blessing and a curse. Being chosen No. 1 turned Yao into an overnight sensation and shed light in a growing basketball market in Asia. However, being chosen No. 1 also had its drawbacks. Yao never fulfilled his full potential because, first of all, the hype that surrounded him was ridiculously unattainable and, secondly, injuries cut short many of his seasons.

4. YAO VS. SHAQ: THE GREAT WALL MEETS THE BIG ARISTOTLE

When the Houston Rockets met the Los Angeles Lakers during a regular-season game in the 2002-03 season, the game took a back seat to the titanic matchup between the two starting centers for each team. It was the first time Shaquille O’Neal met someone bigger than him, and it was the first time Yao Ming met someone who could overwhelm him. Prior to the game, Shaq poked fun at Yao with his infamous Shaq-talk-Chinese soundbite. O’Neal later apologized for the insensitive comment, and Yao accepted. It was the first of many meetings between the two giants, evoking memories of legendary center matchups such as Russell vs. Wilt, Kareem vs. Moses, and Ewing vs. Olajuwon.

3. ‘WILLIS REED’ MOMENT AGAINST THE LAKERS IN 2009 NBA PLAYOFFS

After colliding knees with Kobe Bryant with five minutes remaining in Game 1 of the Western Conference semifinal game in L.A., Yao went down and appeared to be done after being helped off the court by Houston trainers. But Yao stopped halfway to the training room and, against his trainer’s advice, decided against getting his knee examined. He knew the importance of the moment and he wasn’t about to let another injury check him out. He began stretching his knee in the tunnel by squatting and pushing himself against the wall. He would returned to the game and made a crucial 19-foot jump shot and knocked down six free throws in the final three minutes to lead the Rockets to a huge upset. Yao would play in games 2 and 3, but a hairline fracture in his left foot forced him out of the series. The Rockets eventually lost to the Lakers in seven, grueling games.

Whether he deserved it or not, Yao was voted into the All-Star game eight times so for nearly a decade he was the starting center for the West. It showed the power of Yao’s popularity, but it also cast a huge dark cloud over the entire voting process. The worst came in the 2010-11 season when Yao played in just five games and was lost for the season. But that didn’t stop fans from punching his ticket to start the All-Star game in Los Angeles. And if Yao’s name will be on the ballot for the 2011-12 season, it wouldn’t be a shocker if fans voted for him again to start the All-Star game. He’s that popular!

1. LEADING CHINA IN THE 2008 BEIJING OLYMPICS

Coming off yet another injury, Yao vowed he would play for his national team in the 2008 Olympics in Beijing. In fact, Yao said he would have been absolutely devastated if he didn’t get an opportunity to represent his country while it hosted the Olympic Games. Yao worked tireless to rehab his body, and his hard work paid off when he proudly carried China’s flag during the opening ceremonies. China took on the United States led by Kobe, LeBron James and Dwyane Wade – also known as the Redeem Team – to kick off pool competition. Yao scored the game’s first points when he buried a 3-point shot from near the top of the arc. However, that would be the lone bright spot for China as Team USA flexed its muscles and won by 31 points. Despite the blowout, the game was a TV ratings bonanza and the popularity of the sport was at an all-time high (post Michael Jordan).  Yao will never be considered one of the greatest centers to play the game because his career will have a big INC next to his name. However, when you factor in his impact from a global perspective, it’s hard to find anyone who transcended the sport better than Yao Ming.

Joel Huerto is the editor and publisher of OneManFastBreak.net. Follow him on Twitter at: twitter.com/onemanfastbreak. (Photos courtesy of The Associated Press and NBC Sports)