Since trading Pau Gasol to the L.A. Lakers in 2008, the Memphis Grizzlies and their owner Michael Heisley have been getting grief from opposing players and coaches, the media, barbershop critics, season-ticket holders, school children and their grandmas, grandpas, aunts, uncles, friends and neighbors for basically gift-wrapping an NBA championship to the Lakers.

That may be true but the Grizzlies didn’t exactly come out of the deal empty handed. Lost in the whole gift exchange between L.A. and Memphis was the not-so-highly publicized fact that Memphis in return got Gasol’s younger brother, Marc, in the deal.

Marc Gasol, drafted by Lakers in the second round in 2007, was sent to Memphis without much fanfare, but the soon-to-be 25-year-old Spaniard has developed into one of the top young centers in the NBA and he now anchors a young Grizzlies team that is beginning to make some noise in the Western Conference.

The foundation of the Grizzlies’ recent success is built around nine-year veteran Zach Randolph and their three young studs: Gasol, Rudy Gay and O.J. Mayo.

The quartet may not be as popular as Elvis Presley’s Memphis Mafia but they are evolving into one of more entertaining teams in the Association, averaging 104.2 points per game (fourth in the league) and shooting 47.9 percent from the field (sixth).

Randolph is one of just three players who is averaging more than 20 points and 10 rebounds for the season and he is complemented inside by the 7-foot-1, 270-pound Gasol, nicknamed “El Tanque” (which means The Tank) for the way he dishes and absorbs heavy contact in the low block. 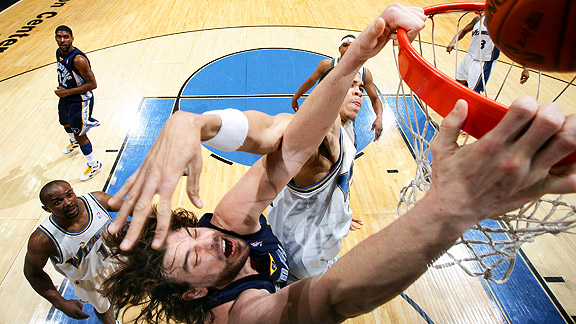 Grizzlies center Marc Gasol is second in the NBA with a 61.1% field goal percentage.

“Zach Randolph may have the better numbers, but I believe Gasol is their most efficient big man,” said Covers expert Sean Murphy, who recently moved up Memphis seven spots from 19 to 12 in his latest NBA Power Rankings.

“One of the biggest reasons for their struggles in recent seasons has been their awful interior defense,” Murphy explained. “Gasol has done an excellent job of plugging that hole.”

Gasol is fourth on the team in points (14.6), second in rebounds (9.6) and first in blocked shots (1.5) and field goal percentage (61.1 percent). His shooting percentage is second-best in the NBA.

The evolution of Gasol as a force on offense and defense, as well as the steady hand of Randolph, have definitely taken pressure off Gay – the team’s budding star and emerging leader.

“We saw signs of this two years ago before he struggled last season,” Murphy said of the former UConn star. “Not only is he leading by example, but he’s also done an excellent job of helping the younger players such as Mayo.”

Like every young team in the league, the Grizzlies are far more comfortable playing at home than on the road. Their recent surge can be attributed to a 15-5 mark at FedEx Forum and greatly aided by a nine-game home winning streak.

“They’re a high-scoring team, but at home is where their strength is. It’s still more of a shake-and-bake team than a power team,” said John Avello, sportsbook manager at Wynn Resort & Casino in Las Vegas.

“They’re on a nice streak, but they’re in a tough conference. In the West, everybody is difficult to handle.”

So, are the Grizzlies finally getting enough respect?

“I think the key thing to watch will be whether they can keep it rolling through the All-Star break, that’s often when young teams start breaking down,” Murphy noted.