After a perfect 8-0 run through the first two rounds of the 2010 NBA playoffs, the Orlando Magic can’t seem to do anything right in the Eastern Conference finals. Down 0-2 to the Boston Celtics, the Magic are now staring at a deep hole they may not be able to climb out of.

The Magic suffered a gut-wrenching 95-92 loss to the Celtics in the Game 2, and the series now shifts to Boston for two games. It could be Orlando’s final two games this season if it doesn’t fix its many issues.

There are plenty of blame to go around and it starts with head coach Stan Van Gundy, detours to Vince Carter’s missed free throws, makes a pit stop at J.J. Redick’s poor clock management and ends with Rashard Lewis’ shooting woes.

Redick was involved in a head-scratching final 10 seconds for Orlando in which the Magic backup guard wasted four precious seconds before finally calling timeout. Down by three with 30 seconds left in the fourth quarter, Van Gundy elected not to foul and forced the Celtics to make a play. After Kevin Garnett missed a long jump shot, Redick grabbed the rebound but inexplicably dribbled to halfcourt before a timeout was called, forcing the Magic to inbound in the backcourt instead of the frontcourt. 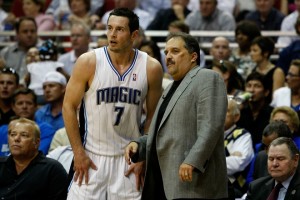 When asked about needing a timeout sooner rather than later, Van Gundy answered with an emphatic “yes.”

“It was all covered in the timeout,” Van Gundy told reporters during his postgame news conference. “We had a six second differential, we were playing for stop and an immediate timeout. It made big difference because if you watch the last play Rashard [Lewis] got open, but because we were inbounding the ball in the backcourt, [Michael] Finley was back in the passing lane and we could not make the pass to him.”

Van Gundy is quick to blame Redick for not calling timeout, but he could have easily called the timeout himself to avoid any confusion. As it turned out, Redick threw the ball in the backcourt to Jameer Nelson with three seconds remaining on the clock, and Nelson’s desperation heave from midcourt fell short.

“I made a mistake,” Redick told the Associated Press. “I didn’t hear the whistle initially. When I didn’t hear it initially, I just kind of went, then I realized we should have called a timeout. So that was my fault.”

The poor decision overshadowed an otherwise solid game for Redick, who scored 16 points off the bench.

The Magic could have avoided the botched play in the end all together if Lewis made half of his field goals. Lewis followed his six-point performance in the Game 1 with an equally terrible five-point performance in Game 2. Lewis, who had been averaging 15 points in the playoffs, has made just four of 16 shots in the first two games in the series – 1-for-9 from behind the arc.

Van Gundy said he needs to do a better job of getting Lewis the ball in spots where he can do some damage. The way it is situated right now, Kevin Garnett has been able to stay attached to Lewis out in the perimeter because the Magic are reduced to standing around on offense waiting on Dwight Howard to make a move in the low post or waiting on Nelson to drive and kick.