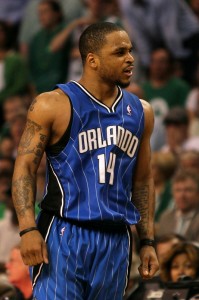 Jameer Nelson reacts after making a 3-pointer in overtime in Game 4. (NBAE/GETTY IMAGES)

It’s only one game, but the Orlando Magic may have turned the corner with the help of their little leader.

Down 0-3 in the 2010 Eastern Conference finals and their season on the line, the Magic finally showed some fight thanks to Jameer Nelson, their 5-foot-10 point guard with a big heart. Nelson took it upon himself to lift his team out of the three-game funk it was in with his scoring, passing, play-making and, more importantly, his leadership.

He scored 23 points, set up Dwight Howard for many of his 13 field goals from close range and finished the game with nine assists, two more than his assist total for the previous three games. He also thoroughly outplayed his counterpart Rajon Rondo, who had been torturing him for much of the series.

“He’s a tough competitive guy, I thought he played with great aggressiveness and fought very, very hard,” Magic coach Stan Van Gundy said of Nelson, who made seven of 14 shots for the game, including two huge 3-pointers in overtime, to lead Orlando to a hard-fought 96-92 victory in overtime in Game 4. 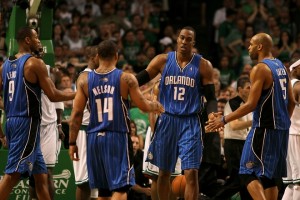 Howard easily played his best game of the playoffs with 32 points (13-for-19 from the field), 16 rebounds and four blocked shots, and J.J. Redick scored 12 points off the bench, all of them coming in the second half that helped maintain Orlando’s lead. But it was Nelson who made the big plays when it matter most.

“He created the vast majority of our offense tonight there’s no doubt about that,” Van Gundy said. “We put a lot on his shoulders and he responded extremely well. He was tremendous tonight.”

Though Orlando is still down 3-1 in the series, getting one win was a huge boost to their sagging confidence after Boston won the first three games. “At some point, somebody’s gonna come from three-nothing down to win a series. And the only thing I knew for sure was we’d start by winning Game 4,” said Van Gundy.

“A lot of times people say ‘I can’t think about winning the series, you gotta win one game.’ I’ve never really bought into that. I’ve never been down three nothing as a head coach. I’ve been [down] three-one. If you don’t believe you’re going to win the series, then it’s too easy to let go. Yeah, you have to play it one game at a time but you have to have a belief somewhere that you can win the series. Otherwise, there’s just not enough to sustain you and to keep you going in the game.”

Van Gundy shouldered much of the blame for the 23-point loss in Game 3, saying he should have done a better job of coaching. If that’s the case, then Van Gundy should get a lot of credit for shifting the focus of the offense from Howard to Nelson, putting him in double pick-and-rolls on the strong side, which allowed Howard to slip to the post instead of having to fight for position every time. Also give Van Gundy credit for not sticking with Vince Carter, who was just 1-for-9 and held to three points. Instead, Van Gundy opted with Redick’s offense and Matt Barnes’ defense down the stretch.

“It’s the first time, I think in the series, we actually made it tough on them.”

With Nelson initiating the attack, the Magic played faster and got into their sets quicker, making it tougher for the Celtics to set up their great halfcourt defense.

“Jameer was driving the ball hard. I thought he was really aggressive. At times, he got down too deep and he did turn it over a lot. But he’s got a lot of guts,” Van Gundy said.

With both teams looking weary and tired from 48 minutes of physical basketball, Nelson put the Magic ahead for good at 89-86 when he banked in a 3-pointer from the wing. He then iced it with another 3-pointer with 1:59 left that put Orlando up 92-86.

The Magic fed off Nelson’s fighting spirit and now they believe can make this a series. Orlando returns home for Game 5 and should the Magic win the pressure shifts to the Celtics in Game 6.