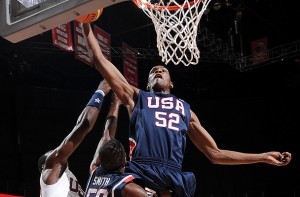 Kevin Durant will be the leader of USA Basketball at the 2010 FIBA World Championship in Turkey, beginning Aug. 28. (GETTY IMAGES)

Not a single player from the 2008 U.S. national team will compete in the 2010 FIBA World Championship, so Team USA will have a brand new look.

If the 2008 U.S. squad – a group that included Kobe Bryant, LeBron James and Dwyane Wade – was nicknamed the Redeem Team, then the 2010 U.S. team should be branded the Rebuild Team.

USA Basketball president Jerry Colangelo and head coach Mike Krzyzewski will have their work cut out for them as they reconstruct the U.S. men’s national team that will not only represent the country in the World Championship starting on Aug. 28 in Turkey, but be the core of the squad that will participate in the 2012 Olympics in London.

To win the World Championship, USA Basketball must have the following:

1) Big, strong point guards. Because FIBA allows hand-checking in international competition, it is important to have ball-handlers who can handle heavy pressure and physical play.

2) Shooters. You can’t have enough of them on your roster. The international 3-point line is three feet shorter than the NBA line so NBA snipers should be able to feast on this advantage.

3) Versatile big men. European big men possess guard skills so you want your power forwards and centers to be able to guard out in the perimeter.

4) Physical and mental toughness. In a single elimination tournament, players who can rise above pressure are essential. Having Kobe Bryant on the 2008 Olympic team was key to winning gold in Beijing. You need rugged and tough-minded players to beat battle-tested teams such as Spain, Greece, Argentina, Russia and Croatia.

5) Zone busters. At the international level, zone defenses are not just a gimmick. It’s important to have players who can defeat a zone on offense and play a little zone on defense.

Center JaVale McGee and forward Jeff Green were cut last week and Rajon Rondo decided to withdraw from the team this week. Here’s the scouting report on Team USA:

Chauncey Billups, PG-SG: At 33, the Denver Nuggets point guard is the elder statesman of this group and his value will come off the floor, acting as an extra coach on the roster. Billups is also a clutch outside shooter, which always comes in handy during international competition. His championship pedigree is a luxury Coach K and the rest of the coaching staff should utilize, especially on a team loaded with 21-year-olds.

Derrick Rose, PG: To be an effective point guard at the international level, you must be able to be physical enough to handle hand checking on the perimeter and quick enough to dart through the zone defenses. Rose fits the mold. It would be interesting to see who Coach K will start, Rose or Billups, because during the scrimmage in Las Vegas Rose blended well with Kevin Durant and Stephen Curry, while Billups meshed well with Rajon Rondo.

Stephen Curry, PG-SG: Versatility will be a theme on this year’s U.S. team, and Curry is one of those guys who can play more than one position. The son of Dell Curry is a shooting guard in a point guard’s body. He can play both positions very well, but his forte is shooting the basketball. Curry is an absolute sniper; one of the best in the league. During his rookie season with the Golden State Warriors, he averaged 17.5 points per game and made 43% of his 3-point shots. Steph Curry is a pure shooter, make no mistake about it. He hould get plenty of open looks if he’s paired with Rose, who excels in the drive-and-kick game. 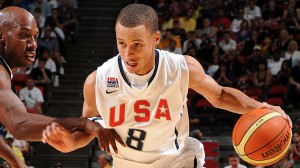 Stephen Curry made 43% of his 3-point shots as a rookie with the Golden State Warriors. Barring an injury, Curry should make the 12-man roster for Team USA. (GETTY IMAGES)

Russell Westbrook, PG: Though Westbrook doesn’t possess the long-range shooting of Billups or Curry, he makes up for it with his defense and incredible ability to get to the basket. During the scrimmages and the exhibition circuit, Westbrook hounded the other team’s point guards and forced a lot of turnovers and poor decisions. The OKC PG is one of the quickest players on the squad and he’ll be used as a situational player by Coach K.

Danny Granger, SG-SF: You can’t have enough shooters on the team, and Granger is one of the best in the NBA. The 6-foot-7 Indiana Pacers All-Star forward can also play some shooting guard, which affords Coach K more options. Granger didn’t have a particularly good camp in Las Vegas, but the coaching staff will give him every opportunity to make the roster. He redeemed himself with a better effort at the Nike World Basketball Festival.

Kevin Durant, SG-SF: Durant is the only sure thing to make the team. In fact, he might be named one of the team captains. With Kobe Bryant resting his knees and LeBron James and Dwyane Wade hosting parties in South Beach to celebrate their union, Durant is now the face of USA Basketball. The Oklahoma City Thunder All-Star and reigning NBA scoring champion has the game and the right mind-set to lead Team USA. During the week-long training camp in Las Vegas, Durant was easily the best player on the court.

Rudy Gay, SG-SF: Fresh off an offseason that proved to be very lucrative for the Memphis Grizzlies forward, Gay adds scoring, defense and versatility to the squad. Gay played well during the scrimmage in Las Vegas and at the World Basketball Festival in New York. His length (he’s got freakishly long arms) will come in handy on defense. Coach K has mentioned that he might use Durant and Gay at the 4 position to create some mismatches on offense.

Lamar Odom, PF: Odom not only brings NBA championship pedigree but he also brings plenty of international experience with his stint with Larry Brown’s Olympic team in 2004. Odom is one of only four players 6-10 and taller on the 15-man roster, and one of them is Durant, which tells you everything about the 2010 U.S. squad. So, because of the team’s lack of size, Odom should be a cinch to make the squad. And depending on certain matchups, Odom will be asked to play center. 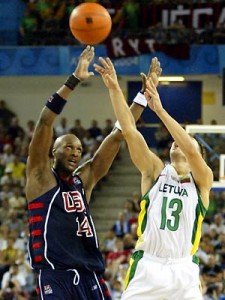 Lamar Odom was part of the 2004 U.S. Olympic team that finished a disappointing third in Greece. (ASSOCIATED PRESS)

Kevin Love, PF: Because of the dearth of big men in the U.S. camp, Love has a very chance to make the roster. Love is not very big (he’s listed at 6-10, but probably closer to 6-8) but he’s a wide body (250 pounds) who carves out a lot of space in the paint. Love’s game may not be as fluid or as versatile as Odom’s, but he’s the type of player who can thrive at the international level. He’s tough, he’s gritty, he’s physical and has a nose for rebounds.

Tyson Chandler, C: The U.S. currently has just two 7-footers on the roster and Chandler is one of them. So, there is no way Coach K will cut Chandler because that leaves the U.S. extremely vulnerable inside. Chandler may not possess great offensive skills, but he makes his money on the defensive end. He’s a very good shot-blocker and rebounder, and is battle tested. He participated in the Tournament of the Americas in 2007 and actually played well. Chandler also adds a veteran presence in the locker room. Expect TC to be Team USA’s starting center at the World Championship.

Andre Iguodala, SG-SF: Iguodala could be used as one of the defensive stoppers for Coach K. The Sixers’ leading scorer can be a very good perimeter defender, and brings more versatility to the squad. If anything, Iguodala could be used as insurance policy in case Granger doesn’t pan out. Iguodala is not a pure shooter, but he can occasionally make a 3-point shot. But his ability to crowd people with his speed, length and athleticism will be his role for Team USA.

Eric Gordon, SG: Gordon has made it extremely tough to cut him because he has been so effective during practices, scrimmages and exhibitions. Gordon is a natural shooting guard and has shown that he can make wide-open threes as well as take the pounding inside on off dribble penetration.